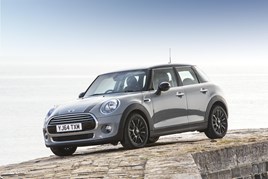 Auto Trader has revealed that the Mini Cooper was the fastest selling used car in January followed by the Fiat 500X.

The used car market was reportedly “dominated” by hatchbacks last month. Seven made an appearance on the national top 10 lists, but out of the 13 regions and countries tracked, nine featured a hatchback as their respective fastest selling.

Regionally, used diesels are the most desirable car choice and got the year off to a “solid start”, despite disappointing new sales performance.

As well as four used diesels making their way on to the national top 10 list, seven topped the regional tables as the fastest selling used car in January:

According to the Auto Trader Retail Price Index used diesels are continuing to hold their value.

On average, a second-hand diesel cost £14,405 in January, which was a £777 increase on the same period in 2017. On a like-for-like basis, this represents a respectable 3% year-on-year growth.

Auto Trader’s retailer and consumer products director Karolina Edwards-Smajda (pictured) said: “The start of the new year is always a busy time for the industry.

“And while it will face some challenges in 2018, the year ahead holds some exciting opportunities for retailers, not least an expanding used car market, increased used car finance, and the growing popularity of AFVs.”