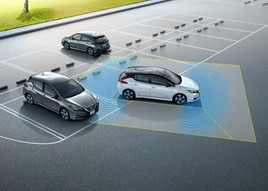 Thatcham Research has called for AEB to be fitted as standard on all EVs afte the Nissan LEAF set the standard with a five-star Euro NCAP safety rating.

The LEAF was the first vehicle to undergo the “tougher” NCAP testing, which focuses on assessing the performance of Autonomous Emergency Braking (AEB) systems, which can detect cyclists.

Thatcham Research’s director of research, Matthew Avery, said: “Safety campaigners have raised concerns about noise, or rather the lack of it, in fully electrified vehicles – especially in urban driving environments.

"This is why standard-fit AEB systems that can detect Vulnerable Road Users should be fundamental to any electric vehicle’s suite of safety technologies – as the Nissan LEAF demonstrates.”

"Chief amongst those is the additional weight an electric battery brings, which must also be protected in the event of a crash.

“In none of the impact tests did we see any compromise of the battery. In fact, the Nissan LEAF achieved maximum points in the side pole crash test, showing good containment of the battery.”

This year sees the biggest shake up in NCAP testing to date, with protocols covering a greater proportion of ‘real-world’ crashes occurring on the road, including:

“This has been reflected by the additional onus the latest Euro NCAP regime places upon carmakers to fit AEB systems that can identify pedestrians and cyclists.

“The cyclist AEB assessment is one of Euro NCAP’s most demanding tests – it happens quickly, and systems must be more sensitive to the erratic movement signature of a human being riding a bicycle.

“Without such AEB systems in place, carmakers will struggle to achieve a maximum five-star Euro NCAP rating.”