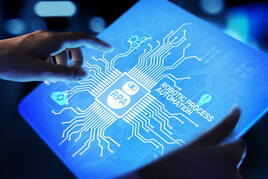 Vehicle taxation, service and MOT bookings are examples of systems which will be operated by RPA, to help to negate or reduce bottlenecks within the business, by automatically processing tasks.

To be eligible to be controlled by RPA, a task must have defined inputs and outputs and it should be high volume, repeated at several intervals and have a pre-defined trigger, said Vertu. For example, the renewal date of a vehicle service that should be completed every year or 10,000 miles can be estimated.

The Vertu Motors board has said that the AM100 car retail group is positioned to realise “ambitious growth aspirations” after crediting a huge Vertu team effort for a creditable 2020 trading performance.

Michael Judge, head of digitisation and development at Vertu Motors, said: “RPA is not a physical or mechanical robot, rather, the ‘robots’ in robotic process automation are software robots running on computers.

"Put simply, the role of RPA is to automate repetitive tasks that were previously handled by humans, it’s not about replacing colleagues but making them more productive.

“We are using RPA to create a bridge between two systems that provide us with no other way to ‘speak’ to each other. It allows us to improve productivity across a wide range of previously manual data entry and processing tasks.”

Vertu Motors is set to relocate its Kia Nottingham dealership into its existing Volkswagen dealership operation in the city as it continues to consolidate its UK retail operations.

The move follows after Vertu acquired the Kia Nottingham franchise from Sandicliffe Motor Group - a transaction highlighted in its recent trading update - and will see Volkswagen sales in Nottingham consolidated into Vertu’s VW Nottingham South, on Loughborough Road, West Bridgford.

Vertu said it started using the service booking robot in early 2020 before the first lockdown due to coronavirus.

Judge said since then, more tasks have been identified where the technology could help the business, he said: “Marcin Watroba, our lead RPA developer, and his team have now built and deployed more than 20 different bots around the business, with plenty more in the pipeline.

“One of our key goals in the digitisation and development team is to strive for total systems and data integration in Vertu Motors, and RPA is an important tool in helping us achieve this.”