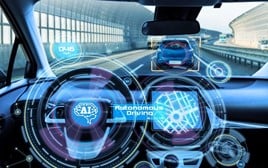 Car buyers are keen to embrace safety-focussed semi-autonomous driver aids but cool on the prospect of handing the helm wholly to a self-driving car, according to a CarGurus survey.

Only 22% of those surveyed were excited about the prospect of a car that does the driving for them, however.

And while 68% also agreed that automated driver assistance features make travel by car safer, only 29% highlighted increased safety as an exciting benefit of fully autonomous vehicles.

Madison Gross, CarGurus’ director of customer insights, said: “This year’s Self-Driving Vehicle Sentiment Survey from CarGurus makes clear that autonomous vehicles’ tech offerings need to align with how people want to use them.

“While there is hesitancy around self-driving technology, how consumers envision themselves using the technology would require full autonomy – which is still a goal that the industry is striving toward.

CarGurus suggested that the lack of enthusiasm for autonomous cars could be linked to recent media coverage of high-profile crashes.

Almost a third of survey respondents (30%) cited this as a key reason that buyers do not trust self-driving capabilities, with 44% of participants stating that they would be concerned about who was responsible if something went wrong.

Asked about their views on the trustworthiness of car manufacturers in developing autonomous cars reveald an unsual disparity in CarGurus’ survey data.

BMW would be the preferred brand for 44% considering a future AV purchase, according to the survey, while 42% said Audi, 33% Tesla, 27% Mercedes-Benz and 26% Ford.

Young said UK Government leaders would be happy at the decision because it would allow them to meet a pledge originally made in 2017 that autonomous cars would be on the road by 2021.

But he highlighted that car retailers should be included in a stipulation for very clear guidance and instruction at the point of purchase to ensure consumers understood the scope of a car’s capabilities to avoid confusion and the potential for an increased road safety risk.

Young said: “Whether it is a standard fit or a later over-the-air update, should we not be requiring customers to commit to a specific handover at the dealer of the new technologies, or to pass an online test before the technology is enabled?

“This could be turned into a positive event rather than a burden, providing another opportunity to build a closer customer relationship, and probably means that in most cases, the customer will get more benefit and fewer surprises from a system that they fully understand.”