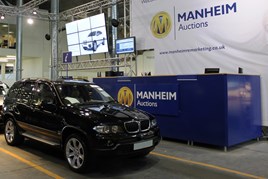 The average selling prices of part-exchanged 4x4s rose at Manheim’s auctions in February.

Average selling prices for part-exchange car stock overall remained stable both month-on-month and year-on-year, with a slightly rise of 0.9% (£31) from January and a slightly drop of 0.7% (£26) compared to the same month last year, when the stock profile was one month younger.

Conversion rates at Manheim’s car auctions in February were strong, with days in stock falling from six days in January to just four days.

“As we enter the plate change period, we expect increasing part-exchange volumes to filter through to our disposal channels towards the end of March beginning of April. We would expect to see some softening of the market as overall auction volumes increase and buyers may be choosier when it comes to acquiring stock.”

Volumes at Manheim’s car auctions were up 29% from February last year, and while year-on-year values also dipped last month, lower value superminis and small hatchbacks made up 37% of auction volumes in February this year, compared to just 25% in 2015.