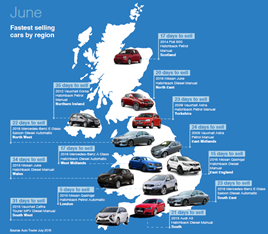 The fastest selling car in the UK in June was the 2015 Hyundai ix35 Crossover in petrol manual form, which took just 19 days from landing in the showroom to being sold.

According to Auto Trader’s latest figures, mainstream brands dominate the UK’s fastest selling cars both nationally and across the regions in June.

Vauxhall, another mainstream brand, saw its Mokka crossover find favour with buyers as it took an average of 21 days to sell, and ranks second in the nation’s quickest sellers chart.

Of the country’s top 10 cars that shifted out of showrooms in the least amount of time, seven were popular make models. The only premium brand represented in the top 10 was Mercedes-Benz, which took the three other spots with its SLK Convertible (third), A Class hatchback (eighth) and E Class convertible (10th).

The German premium brand also dominated the quickest selling charts in the North West, proving the quickest and taking four other spots, and the West Midlands where it took the top five spots with its A, C and E-Class models.

Karolina Edwards-Smajda, retailer and consumer products director, said: “Mainstream makes and models dominate not just the nation’s quickest selling cars in June but across the regions too. The Hyundai ix35 is no stranger to being one of the quickest cars to sell as it ranked fourth last month and sixth in April. It took the seventh and eighth spots in Scotland’s fastest sellers in June.”

Edwards-Smajda said: “It can be tempting to think the cars that will be the quickest to sell will be those that don’t exist in great numbers so are rare and sought after.

“But the reality is that it’s about stocking the cars that are in demand in the retailer’s area, the ones that consumers find desirable, and it’s often surprising which models car buyers are really after.”