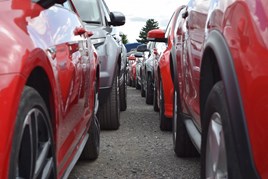 Cox Automotive saw falling days in stock and high volumes in its online and auction hall used vehicle selling platforms in September – but values were down at Manheim auctions.

In the retail market, Motors.co.uk saw days in stock falling by two days, and a 1.5% (£180) increase in the average selling price of cars listed on the car search website, rising to £12,290.

The increase was spread across prestige brands, where prices rose by 3.7% (£701) and volume brands, the average selling price of which increased by 1.2% (£109).

Hybrid cars saw the biggest increase in average selling price of all fuel types, rising by 6.1% compared to August. Diesel and petrol cars both saw a monthly increase in selling prices of 2.0% and 1.5%, respectively.

Prices of convertibles also rose by 6.1% in the retail market as SUV average selling prices were up by 7.9%, compared to August.

Manheim’s fleet and leasing vendors did benefit from stronger conversions, however, with the quickest average time to sell since April at 14.4 days in stock.

Vendors benefitted from the quickest speed of sale for at least 12 months, with cars recording an average of just 9.2 days in stock overall.

As expected at this time of year, SUV values at Manheim rose by 3.9% and while prices of petrol cars held firm, there was a slight drop in the average selling price of diesel cars.

Part-exchanged stock performed best in the wholesale market in September, with average selling prices rising by 2.3% to reach their highest levels since September 2015, despite a 9.3% increase in part-exchange volumes in Manheim’s auctions.

Prestige marques saw used values rise by 1.6%, while volume brands had average selling prices 3.6% above their figure in August. Dealer vendors at Manheim recorded their quickest average speed of sale for at least six months in September at an average of just 7.3 days in stock.