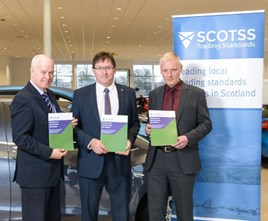 The Scottish Motor Trade Association has teamed up with Trading Standards to deliver a new set of guidelines to used car dealers operating in Scotland.

The guidance, published by The Society of Chief Officers of Trading Standards in Scotland (SCOTSS), is intended to help second-hand car dealers comply with important consumer protection law including the Consumer Protection from Unfair Trading Regulations 2008 and the Consumer Rights Act 2015.

Among the new guidance is a warning related to the potential mis-selling of a vehicle by omission of details in its description, an issue highlighted by the ASA’s ruling against Glyn Hopkin and the FCA Group after two former business-use cars were described as having had “one owner”.

Glyn Hopkin unsuccessfully argued that any potential customer for the cars would have been made aware of the vehicles’ status upon enquiry in order to make a fully-informed purchasing decision.

Law firm Harcus Sinclair told AM that it has now had 5,000 expressions of interest in a class action on behalf of motorists who believe that they were sold a car that was wrongly described by the retailer.

The new guidance published by the Society of Chief Officers of Trading Standards in Scotland warned that inaccurate information about the status of second hand cars could lead to criminal and civil court action.

The society said an example of a misleading omission was “failing to disclose a vehicle for sale is an ex-business use vehicle which may have had multiple users”.

That included giving the impression a vehicle has one previous user when it is an ex-business use vehicle such as “an ex-rental, driving school vehicle or taxi.”

The guidance said: “If you mislead, behave aggressively or otherwise act unfairly towards consumers, then you are likely to be in breach of the CPRs (Consumer Protection Regulations) and may face criminal or civil enforcement action. In certain circumstances consumers can take legal action against traders.”

“We are publishing this comprehensive guide to the law to help car dealers in Scotland comply with the law and improve the level of service they give to their customers.”

Adamson added: “We have consulted widely on the content of this guidance, with trade and consumer bodies, and we hope it will make a significant difference to general understanding of the law.

“We are pleased to work with the SMTA in launching the guide and highlighting it through their member network.”

Sandy Burgess, chief executive of the Scottish Motor Trade Association (SMTA), said: “This document is a welcome addition to the level of guidance and advice available to our members and the wider industry of professionals who are engaged in the retailing of used vehicles across Scotland.

“By adhering to the detailed advice given, our membership can expect to maximize their exposure to the motoring consumers seeking to buy their next vehicle”.

He added: “We are delighted to have been involved in the creation of these guidelines which will serve our membership and the consumer well for years to come.”

To download a copy of the new used car sales guidance from SCOTSS, visit https://www.scotss.org/cars/SCOTSScarsalesguide.pdf