Average used car prices on Auto Trader have increased for the fifth consecutive month to £13,705 - up by a record 6.1% in August year-on-year.

The latest data from Auto Trader’s Retail Price Index, which is based on pricing analysis of around 900,000 vehicles every month, showed that August saw the steepest month-on-month increase in rate of growth since the Index began, leaping from 4.6% in July.

Auto Trader said average prices in August were affected by a number of different factors, including the mix of stock within the market.

Last month there were fewer diesels, automatics and cars aged under one year old in the market, which as a result meant price growth was in fact slowed down by a decline in these more expensive segments.

While supply challenges remain for many retailers, demand continues to grow at record levels.

On Auto Trader, the traffic seen throughout June (64 million) and July (64.4 million) has accelerated in August to 67.1 million cross platform visits to its marketplace: a year-on-year increase of 30.5%.

As a result, the average sticker price for a used petrol car increased 6.8% (£12,389) in August, the ninth month of consecutive growth.

However, while demand was up 19.3% YoY, supply of second-hand diesels in the market fell a significant -20.3% in August.

It contributed to a 6% YoY (£14,572) price increase, the highest ever rate of growth for second-hand diesel cars recorded on Auto Trader’s Retail Price Index.

In contrast to their ICE counterparts, since the beginning of the lockdown period demand for low emission vehicles has fallen below levels of supply.

Auto Trader said this suggests car buyers are reverting to the type of vehicles they are familiar with, and what they consider to be the most affordable choice, namely petrol and diesel cars.

In terms of body types, while hatchbacks saw the highest average price increase (10.7%) last month, SUVs continue to record the highest level of demand at 37% YoY.

However, they recorded the lowest rate of price increases at 2.9%, which is due in part to the high level of supply.

In August every age band of used car recorded an average price increase.

While demand outstripped supply in both segments, premium brands continue to show stronger performance compared to volume brands, increasing 27% versus 23%.

“Although some of the supply constraints had begun to ease with the reopening of online auctions, many of our customers are reporting that they continue to face difficulty in sourcing wholesale stock.

“Combined with the massive acceleration in demand on our marketplace, whilst the trajectory may begin to level off slightly, we’re confident prices will remain buoyant over the coming months.”

Walker said it was reassuring to see demand in the market as retailers enter into what will be a key month for the automotive industry’s recovery.

During the lockdown period Auto Trader data showed the number of retailers making price changes and the value of price adjustments was significantly lower than normal trading conditions.

This has increased following the reopening of showrooms in June; however, it remains below pre-COVID-19 levels.

In August, the average number of retailers making daily price changes was 1,982; 17% fewer than in August 2019. The average amount being changed on a daily basis was £263, which was 28% decline on the same time last year.

“Demand for internal combustion engine cars continues to be buoyant in the used sector, which is reflected in the average price increase for petrol and diesel vehicles.

“We expect appetite for used cars to remain robust over the coming weeks thanks to a number of factors including the movement away from public transport to owned vehicles and the increase in disposable income for a number of consumers.” 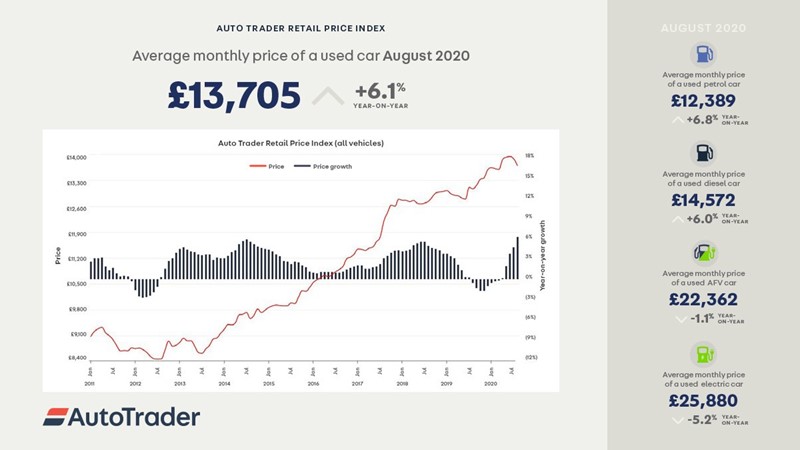 AM Poll
Are you training your staff on commission disclosure ahead of the January FCA changes? Please leave a comment
Vote
View all
2179