Used cars sold faster in October than in any other month this year, according to eBay Motors Group.

Supermarkets sold used cars the quickest in October, averaging 30.5 days, followed by franchised dealers at 31.8 days. Independents recorded the only month-on-month improvement, with days to sell dropping from 44.7 to 41 days.

Cars priced between £10,000 to £15,000 were the fastest sellers, averaging 28 days in stock, suggesting an influx of three-year-old cars as a result of the September plate-change. 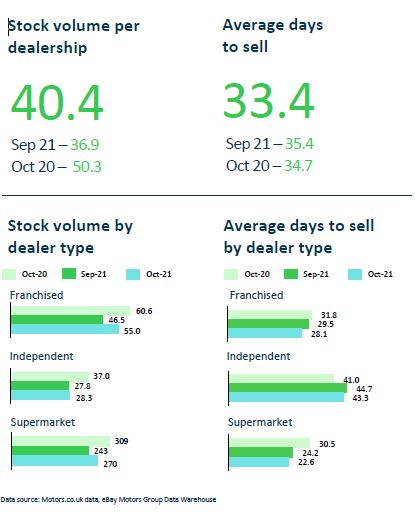 Dermot Kelleher, head of marketing and research at eBay Motors Group, said: “October proved to be another strong month for dealers, with many benefiting from the combination of increased used car inventories, strong prices, high demand and fast sales.

“Once again dealers worked hard to keep on top of demand while paying high prices to restock. The challenge over the coming weeks will be to retail these cars profitably. While average advertised prices of the top 50 leading makes and models on Motors.co.uk were still rising, our Market View shows the rate of increase has slowed down.”

With consumer demand for used cars still riding high, the average stock volume per dealership advertised on Motors.co.uk increased by 9% to 40.4 units, boosted by part-exchanges entering the market following the September plate-change and following two months of decline.

These improved stock inventories were led by franchised dealers where averages per site increased 17% month-on-month to 60.6 units, followed by supermarkets where averages increased 11% to 309 units. Independent dealers saw a more modest increase of 2% to 37 units.

Despite these improvements, average stock levels remained 10 units down year-on-year.

Although the market is entering a period of seasonality, eBay Motors Group expects dealers to continue to see strong demand from new car buyers switching to used.

“The widely reported new car supply issues around the semiconductor shortage is about to be compounded by the global shortage of magnesium, a key raw material in car production. As a result waiting times for new cars will increase further, prompting more buyers to look for alternatives in the used market,” said Kelleher. 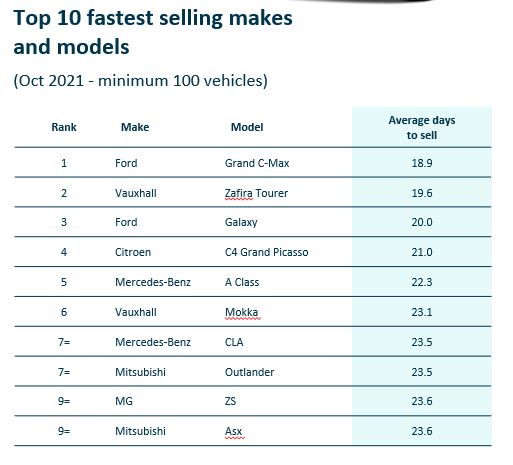 The ongoing pressure on supply is demonstrated by the rising value of the mainstream Ford Focus with average prices for three year/30,000 mile examples increasing 7.7% since September to £18,575, a year-on-year rise of 28.7%.