Used car supermarkets cut the price of their cars to trigger a 0.3% month-on-month decline in vehicle values on eBay Motors Group marketing portals during February.

After months of soaring used car values across the sector, triggered by an imbalance of supply and demand, the nation’s supermarkets took the decision to reduce their advertised values – taking a 12.7% average hit on their stock volumes in the process.

According to eBay Motors, February saw average advertised prices decline from £17,924 to £17,876, following a marginal rise of 0.8% in January.

The move helped accelerate car supermarkets’ days to sell by over a week, eBay Motors said – to 28.4 days.

Franchised dealers reduced their days to sell from 45.1 to 42.5 days despite used car values remaining on a par with January at £21,387, while independents’ days to sell remain almost unchanged at 50.6 days despite a 1.4% increase in values to £14,881. 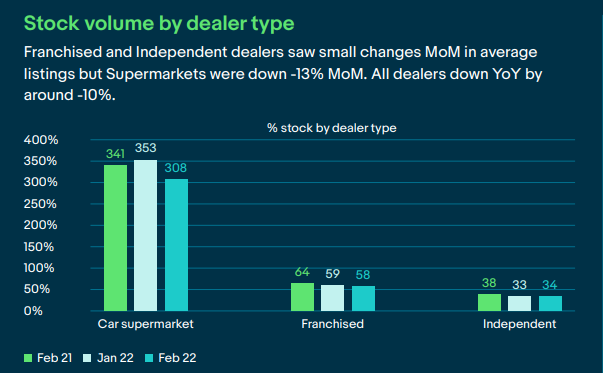 Stock volumes were only slightly down month-on-month, according to eBay Motors – dipping from 46.2 to 45.6 units.

However, the ongoing industry-wide squeeze on stock was highlighted by the car supermarket sector which saw volumes drop 12.7% to 308 units.

Franchised dealers averaged 58 units, just one unit down month-on-month, while independents increased by one unit to 34.

Dermot Kelleher, head of marketing and research at eBay Motors Group, suggested that some car retailers may have been selling stock built up at the end of last year. He said: “February saw some welcome stability across the used car sector with advertised prices remaining strong and days to sell improving.

“Sourcing desirable stock continues to be a challenge. However, the coming weeks will see a welcome influx of trade-ins in the franchised sector as a result of the plate-change, while dealers across all sectors will be trading through inventories many built up before Christmas.”

Whether signs of “market stability” are being accurately read or not, market uncertainty remains.

AM recently reported how the war in Ukraine had impacted retailers’ hopes of a vehicle supply recovery in 2022.

Limited supplies are also expected to result in lower-than-average March registrations and the knock-on effect of reduced volumes of part-exchange vehicles entering the market. 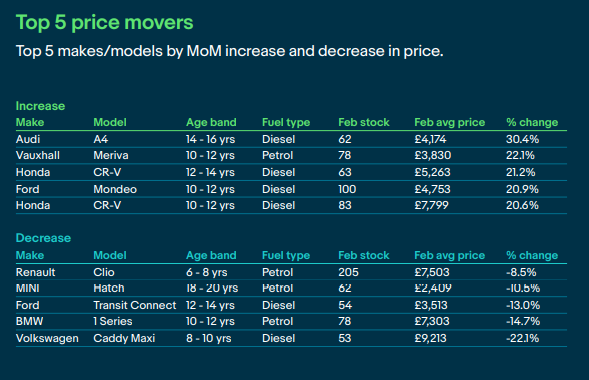 Continued demand in the used car sector saw some older vehicles continue to deliver significant price rises in February, according to eBay Motors.

Six-to-eight year-old Ford Kugas and Range Rover Evoques proved to be the month’s fastest-selling vehicles – both averaging only 19.4 days to sell. 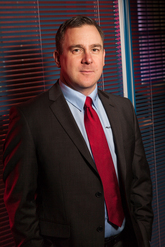