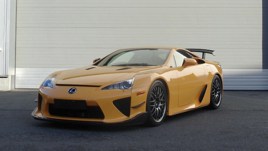 The Lexus LFA has emerged as the most searched-for 'rare' car, in a study by confused.com.

The Japanese supercar received almost 43,000 Google searches last year, despite only three being registered in the UK.

McLaren's P1 supercar also made it onto the list, attracting 14,210 searches despite only four being registered in the UK.

Other cars that made it into the top-10 (see below) include the Kia Stinger, Ford GT and BMW Z1.

Alex Kindred, car insurance expert at Confused.com, said: “The rarity of particular car models can often lead to significant customer demand. Customers are often keen to get their hands on unique product offerings to distinguish themselves from others. Whether you’re a true classic car enthusiast, or simply enjoy the finer things in life, the combination of car rarity and nostalgia has led to an incredibly competitive motor market.

“Cars such as the Lexus LFA see over 42,000 annual searches, yet there are only 3 available in the UK. Similarly, despite only 4 models of the McLaren P1 being available annual searches average over 14,000, arguably driving the desirability of the car even further.

The study also highlighted the most sought-after 'affordable' cars. In this case, the Ford Mustang topped the list, followed by the Jaguar F-Type.

Used Land Rover Defender models are the most desired models at auction, according to Aston Barclay’s desirability index.

The remarketing firm scored the Defender 9.0 out of 10, in August, the highest rating ever achieved in the index.

Few Defenders are coming to auction but, when they do, they create a great deal of buyer attention, which translates into multiple bids and very strong prices.

Premium-brand SUVs dominate the league table, with the Mercedes GLC Audi Q7, Jaguar F-Pace and BMW X5 all scoring highly, too. The move marks a shift in behaviour from buyers, as last month's most desireable model was the Vauxhall Corsa-E.

The top 10 most popular rare cars: