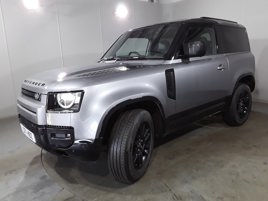 Used Land Rover Defender models are the most desired at auction, according to Aston Barclay’s desirability index.

The remarketing firm scored the Defender 9.0 out of 10, the highest rating ever achieved in the index.

Few Defenders are coming to auction but, when they do, they create a great deal of buyer attention, which translates into multiple bids and very strong prices.

Premium-brand SUVs dominate the league table, with the Mercedes GLC Audi Q7, Jaguar F-Pace and BMW X5 all scoring highly, too. The move marks a shift in behaviour from buyers, as last month's most desireable model was the Vauxhall Corsa-E.

“At the opposite end of the market, the summer break has reduced demand for mainstream used cars as many dealers and consumers have chosen to go away on holiday after the pandemic restricted foreign travel. However, we believe the used market will perk up again for this type of stock in September,” he added.

Used car values continued to grow on a year-on-year basis in July, although the rate of growth is softening.

Data from Auto Trader’s Retail Price Index shows the average price of a used car was £17,173 in July, which on a like-for-like basis, is a 19.5% increase on the same period last year.

The rate of growth is slower than the 32.2% recorded in April 2022, feeding the narrative among some commentators that an imminent price crash is coming, but Auto Trader said on a month-on-month (MoM) basis, average prices have increased (0.2%), which contrasts with typical seasonal trends (July 2019 recorded a -0.4% decline). The sentiment is backed by Cap HPI’s director of valuations Derren Martin.