The death of Arthur Daley 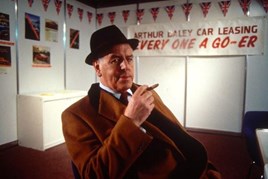 The announcement of the death of George Cole left me with an obvious sense of sadness.  He was one of the UK’s great character actors, in fact if anything he was too good and as a result of the quality of his acting the retail automotive sector suffered.

His portrayal of the second hand car dealer Arthur Daley in the TV series ‘Minder’ captured the imagination of the British public and for many years car salesmen were stereo-typed by this iconic but untrustworthy character.

When I first launched the Retail Automotive Degrees at Loughborough in the late 1990s the Independent boldly proclaimed ‘Arthur Daley goes to college to sell more cars.’  The profession was openly ridiculed and was held in particularly low esteem a reputation that was reinforced by the weekly instalments  showing  Arthur coming up with some devious scheme to ‘rip off’ the general public or business acquaintance.

It demonstrated the power of television to influence peoples’ perception of both an industry and a profession.  By comparison at around the same time another TV series ‘Silent Witness’ starring Amanda Burton was launched and portrayed a sophisticated professional cutting through crime and coming up with unexpected solutions.  This raised the profile of forensic science to such a level that universities were inundated with applicants wanting to study this previously low profile subject area.

The Arthur Daley legacy still lingers today with a recent popularity survey placing used car salesmen below colonoscopies, cockroaches, Genghis Khan and France.  However they did manage to beat the ebola virus, North Korea and gonorrhoea!

George Cole was a great actor and for that he will be mourned.  He had a long and successful career playing both classic and comedy roles.  It is ironic that one of his great successes had such a detrimental impact on the car industry.

Undoubtedly we are saddened by George’s death but few in the industry will regret the passing of Arthur Daley.

AM Poll
How has the COVID-19 pandemic affected your attitude or mental health? Please leave a comment
Vote
View all
1828