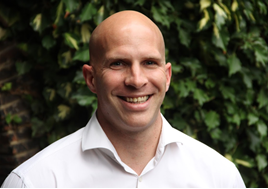 When I think about electric cars - I envision Marty and Doc hovering above the clock tower in the Delorean; UFOs landing on the M25 and tumbleweed floating through an old Shell petrol station.

While these visions of a post-apocalyptic future (plus Michael J. Fox) spring to mind at the mere mention of electric cars, the reality is that in just a few years they will be the automotive industry’s major player filling our highways.

Superficially, they don’t look all that different to the motors we drive today.

The question is, what else will have to change to accommodate them?

This month the UK government ruled that no diesel or petrol cars will be sold in the UK from 2040. It provoked the same reaction in many of us:

First up was denial, we told ourselves 2040 was years away and nothing to worry about.

This comforting ignorance was swiftly ruined by the frightening realisation that kids born in 2000 are turning eighteen next year, meaning everything around us is changing faster than we’d perhaps realised. We then entered panic mode.

Admittedly, one possibility is that this time in 23 years we could all be sitting contentedly on river banks, cross-legged with flowers in our hair, breathing in air that’s cleaner, while relaxing to the silent hum of electric traffic.

The bleaker counter-point? There’s a massive chance we won’t be smelling of roses at all. We’ll have less money, pricier cars and rigidly set charging times (that may or may not be dictated by our neighbours).

Putting it into perspective, the National Grid currently powers the electrical needs of 65,648,100 people residing in the UK: Fridges, microwaves, televisions, phone chargers, lights, energy and a small proportion of vehicles.

Plug in a further nine million cars and the UK’s power supply might just collapse altogether.

At present, the presented ‘electric’ solution to our pollution crisis creates more questions than answers, leaving car buyers in limbo and car manufacturers in a panic.

The imminent domination of electric vehicles may be fantastic news for a good proportion of tree hugging homeowners, comfortable in their finances with a charging port freshly installed on their driveway, partially paid for by the £500 incentive given by the Office for Low Emission Vehicles.

But what about those who live in a tower block? And how about owners of terraced homes with doors leading to streets, tenants in shared accommodation and the millions who have to park miles away from home. Where will they charge their cars?

These are all questions that spring to mind when the topic of electric cars is brought up (along with Marty on his hoverboard of course) but is the automotive industry providing answers or merely ploughing on regardless, comfortable in the knowledge that we don’t have a choice in the matter?

Let’s talk housing. If you’re in a block of over 100 flats, or even 50 or 20 and there are just three car charging ports, will you take turns to plug in? Perhaps one of you will have to get the bus once a week, or maybe you’ll have to rely on car sharing?

What if the majority of you work 9-5? Pragmatically speaking, there may not even be more than five ports for every 100 homes.

How will you pay for the facility, and for those who don’t drive, but reside in the block - will they have to pay for you too?

Terraced homes are rather tricky as well. Hundreds of thousands of UK residents open their front doors to pavement, or rather a small passageway for pedestrians to wander by.

Will their ports be publically available on the roadside next to lamp posts and dustbins?

As for parking, we all know the probability of getting a prime position outside your house is zero to none.

How on earth would the new legislation regarding charging be put into practice?

Petrol stations will either be closed and turned into housing or made into electric charging stations.

As for road rescue services, will they have to drive a van full of electricity to save those without charge?

The main question is, how long until we have to give up our right of passage as drivers?

For an opinion piece, I realise I’ve asked a lots of questions and answered few.

But the reality is we are all being left in the dark; ironic for an issue concerning electricity.

The time has come where we need to think long and hard about the consequences of electric motors and how much we will have to sacrifice in order for them to become a success.