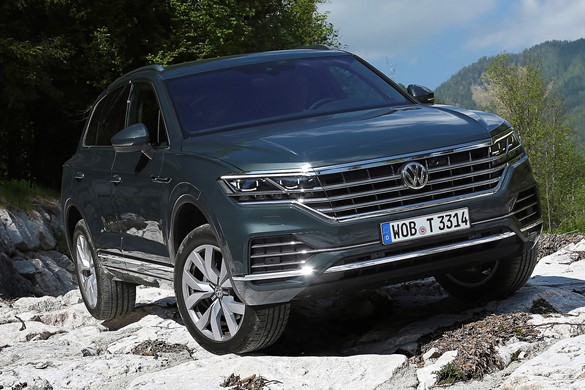 There must be some disappointment that Volkswagen UK is unable to launch the brand’s flagship Touareg SUV with the fanfare of a low-emission hybrid option.

The more stringent emission regulation demands of China and the allure of a market where the brand sold 1.01 million vehicles during Q1 was clearly enough to determine that the 367PS plug-in hybrid version of the new flagship C-segment SUV should be diverted there.

The otherwise technology-packed Touareg went on sale here on June 7, available initially only with a 286PS three-litre V6 turbodiesel, which delivers 40.9mpg on the combined cycle.

No date has yet been set for the arrival of the plug-in hybrid Touareg model.

Sales are expected to be split 60:40 in favour of fleet, compared with the previous model’s 85% fleet sales.

At speeds below 27mph, four-wheel steering directs the rear wheels up to five degrees in the opposite direction to those at the front. This aids the car’s agility around town and gives the Touareg an 11.2-metre turning circle (20mm greater than a Golf).

Above 27mph, the rear wheels turn in the same direction as the front to aid stability.

Air suspension and active anti-roll bars, which tense when cornering forces are detected, and a locking centre differential capable of channelling up to 70% of the 600Nm of available torque to the front axle, or 80% to the rear, further assist traction and dynamic stability.

Volkswagen’s chassis settings can tune the Touareg’s demeanour through a variety of on- and off-road settings, meanwhile – Off-road+ raising the springs by 70mm, Sport dropping the ride 15mm.

During the Touaraeg’s media launch in the Austrian Alps, its tech-packed chassis displayed an impressive ability to corner flat on twisting mountain roads, while maintaining impressive levels of ride comfort.

The option of an electric folding tow bar allows those who venture off-road and use the car for work to make use of its  3.5-tonne towing capability.

The Innovision system combines a 15-inch touchscreen with a 12-inch digital instrument binnacle to deliver Google Maps sat-nav imagery into the cockpit and is as intuitive as anything we have come to expect of VW’s infotainment systems.

However, despite being a stand-out feature, the swathe of high-definition display screens will only be fitted as standard to the range-topping R-Line Tech trim.

The Touareg is available in SEL, R-Line and R-Line Tech trims from launch.

It is clear that Volkswagen’s flagship SUV is being positioned as a technological showcase for the brand. Volkswagen has thrown everything at its new model and the result is a vehicle that actually feels every bit of its quoted starting point of £51,595.

Bentley is currently charging £162,700 for its Bentayga SUV and Rolls-Royce is about to demand £230,000 from customers for its Cullinan, but the Touareg feels like the most cutting-edge of the breed, especially when in combination with that new cockpit architecture.

The only thing that Volkswagen UK needs to work on is its demands to get the plug-in hybrid version on to our shores as quickly as possible.

With diesel sales on the slide – at least in the new car sector – motorists now crave an AFV alternative to diesel just as much as they do the go-anywhere, family-carrying capacity of a premium SUV.

Let’s see how quickly VW can deliver and help UK dealers make the most of what is an impressive new flagship for the brand.

How many Touareg models does Volkswagen expect to sell in the UK and what will be the most popular trim?

While we wouldn’t commit to a number, we can expect to build confidently on the strong performance of outgoing Touareg which, last year, sold 3,689 here. The most popular model is likely to be a diesel-powered R-Line.

The new Touareg boasts many new features. Which standard specification highlights will win over buyers?

In the SEL there’s luxurious Vienna heated leather; traffic sign recognition and lane assist. And, of course, there are so-called ‘hygiene factors’ such as front and rear parking sensors; adaptive cruise control, and the standard-fit 9.2-inch Discover Navigation Pro infotainment system. R-Line adds a striking new exterior body kit, along with 20-inch diamond turned wheels, 4 Zone Climate Control, Park Assist with rear view camera, and an electric tailgate. The big standard-fit feature on the range-topping R-Line Tech model is sure to be the new Innovision Cockpit.

Where are the key upsell opportunities for dealers?

We expect there to be a significant interest in the panoramic roof – the largest available on any Volkswagen vehicle – along with the option of the Innovision Cockpit on SEL & R-Line trims; a fully electric power tow bar – given new Touareg is still able to tow 3.5 tonnes; and the attractive new 30-colour ambient lighting system.

What will be the expected splits between retail:fleet and petrol:diesel in sales of the new Touareg and how might figures differ from the previous generation model?

The petrol/diesel split is expected to be 20/80. Having a petrol engine on offer in the new car is not only very exciting, but also very important. The fleet/retail split will be around 60/40. Current Touareg is typically a local business fleet car and we intend to remain competitive in that sector with the new model.

A hybrid version of the Touareg is being sold in China. When will this reach the UK and what share of sales would you expect it to achieve?

There is no official date set yet regarding the availability of a PHEV version of Touareg in Europe.

How will the Touareg marketing campaign seek to reach new customers?

Major marketing activity will be supported by a national billboard campaign. Communication will be focused on the premium comfort, intelligent technology, and class-leading safety features of the car, which will certainly help it appeal to new audiences. From a CRM perspective we will be communicating with potential new Touareg owners through the brand’s growing KMI (keep me informed) database, which has been quickly established since the car’s global launch earlier this year.