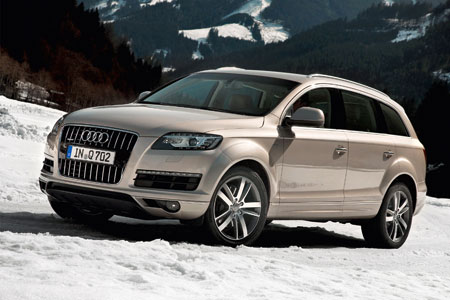 In this era of downsizing the Audi Q7 appears a bit of a lumbering giant. The seven-seater 4x4 is vast – more than five metres long and almost two metres wide – but six years since its launch it remains a prestigious, go anywhere, carry anyone tool in the German brand’s box.

And thanks to this £44,960 model’s standard kit, such as adaptable air suspension, rear parking sensors, cruise control and dual zone climate control, driving it soon becomes a relaxing experience once you get used to its dimensions.

Up to seven occupants can be comfortably accommodated in the three rows of seats that are included as standard, and no less than 28 seating and loading configurations giving a maximum load capacity of 775 litres with five seats in place or 2,035 litres with two seats in use.

Since mid-2010 the Q7 range gained a revised 3.0-litre V6 turbodiesel, which delivers better economy, drops CO2 output down to 195g/km but still provides responsive acceleration and overall versatility. Driving this car, there’s no doubt of making smooth, refined progress even with the interior stuffed to maximum capacity.

The Q7 put Audi on the map for SUV customers, but now the carmaker has Q5 and Q3 to take the baton on. Nevertheless, it has few rivals to compete against for the senior executive with a large family to transport.