The Cadillac SRX is the manufacturer’s first-ever luxury crossover vehicle, so its introduction positions retailers in a new segment.

Due in the UK in right-hand form towards the end of next year, the four-wheel drive SRX will line up size-wise against the likes of the Audi Allroad and Volvo XC70, but will be priced closer to BMW X5, Mercedes M-class and Range Rover Sport.

Add the optional UltraView power glass roof (£1,500) and rear seat entertainment package (which includes a Panasonic DVD player/screen and wireless headphones), and the price creeps up to £46,600.And this could present the SRX with its biggest problem.

Although well equipped (even without the glass roof and ICE options), with a potent, torquey V8 engine and an undeniable visual impact, if the car is challenging the X5/M-class/Sport class, it looks a little out of its depth. 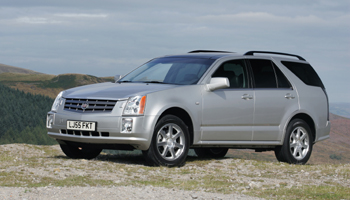 True, for the price customers get every conceivable toy and piece of electronica, such as electronically adjustable peddles, eight-way adjustable seats, sat nav and a Bose sound system. But the swathes of fake wood and questionable quality of some of the plastics used in the cabin conspire to counter the potential wow factor.

One trick up the SRX’s sleeve is its third row of seats. Currently an optional extra, Cadillac Europe is hoping to make it standard on right-hand-drive vehicles, allowing seven passengers to be accommodated.

All those seats do affect boot space, though. With all seats up, available space is 238 litres, less than a 3dr Ford Fiesta. Just as well, then, that the third row lies flat. Electrically operated, this boosts load space to 918 litres.

The SRX is a true crossover vehicle: part SUV, MPV and estate. The question dealers need to counter is whether this means the vehicle offers a little of everything, but specialises in nothing.

Cadillac is reluctant to reveal sales targets. Its key objective remains the re-launch of the Cadillac and Corvette brands into the UK and to build a quality dealer network with official partner Pendragon.

What it will say, is that last year Cadillac sales in Europe totalled 1,500 vehicles. SRX accounted for 800 of these, or around 55%, so company executives think it likely the 4x4 crossover vehicle will make up a similar percentage of total UK sales.

The left-hand drive SRX, together with the CTS and STS saloons, and XLR two-seater convertible, have been available in the UK since May. All are classed as North American vehicles until introduction of the European designed and built BLS starts in May 2006.

A diesel engine will feature in the next generation CTS in two year’s time, so expect this to filter through to the SRX range in due course.

At a little over 16ft in length (4,950mm – 13cm longer than a Vectra estate) and 6ft (1,844mm) wide, the SRX is a big vehicle, with a big spec. But for the fully-optioned, top-of-the-range model at least, it comes with an asking price that we reckon is arguably just too big.

With roof height of about 5ft 6 inches (1,722mm), the SRX isn’t the tallest vehicle on the road. But its length, width and wheelbase combine to make it feel like a substantial piece of metal.

This is great for interior room, but it does make the SRX feel a touch unwieldy at times, especially on B-roads. Not that you’d feel unsafe.

And there’s more than enough power to get you out of trouble. Our test vehicle’s 325bhp 4.8 V8 Northstar engine delivered throughout the rev range and felt well mated to the five speed automatic ‘box. Motorway cruising is effortless. 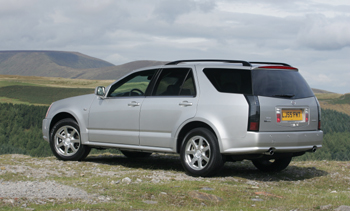 The 1.9-litre turbodiesel is both quiet and smooth, and the premium positioning of the car is enhanced by an excellent Bose speaker system and comfy leather interior as standard.