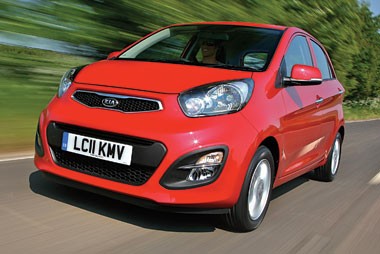 Kia’s little car has grown up. That’s the strap line for the Korean brand and its replacement for what has been its best-selling model over the last seven years.

The Picanto sold well for Kia, even before the name was thrust into the public’s consciousness and this new model brings it in line with the brand’s funky new design image dreamt up by design boss Peter Schreyer.

The previous five-door design was cute and feminine, but this new model is more muscular and European in line with volume rivals. A sportier three-door model Picanto will launch in the UK later this year.

The new Picanto launch will feature the largest marketing spend from Kia Motors UK this year with a national TV campaign starting on June 17.

Kia’s after first-time buyers and downsizers and will look to pull in what it describes as an “established customer base” with the lure of a seven-year warranty which was not available on the first Picanto model.

The A-segment in the UK this year will account for more than 180,000 sales and Kia is confident the new Picanto will take at least 8% of that, rising to an expected 12,000 sales in its first year.

Interior design is basic, but still modern and the new Picanto features solid trim and finishes on a par with French rivals.

There are three trims to choose from: 1 (1 Air), 2 and 3. The 1 Air optional trim was introduced foll-owing a critique from journalists on the car’s launch that air conditioning didn’t come as standard on the entry level trim. It’s a £600 option now.

Kia expects the mid-grade level 2 trim to claim 60% of sales, with the rest evenly split between levels 1 and 3.

The new model goes on sale with 68bhp 1.0-litre and 84bhp 1.25-litre petrol engines which have improved fuel consumption and CO2 emissions, but power and performance has also increased.

They are peppy around town and the 1.25-litre will reach motorway speeds without a problem.

The Picanto shares its platform with Hyundai’s current i10 with some added tweaks and it handles adequately for a city car.

Pricing is aggressive when looking at the £10,195 mid-spec level Picanto 2 against its rivals, barely under-cutting the Ford Ka Zetec 1.2 at £10,295 and it’s actually more expensive than the Renault Twingo 1.2 Dynamique at £9,995.

It just goes to show how Kia is transforming from budget to a mainstream competitor.