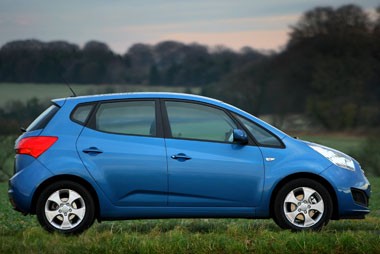 Customers considering a B-segment MPV want space, ease of entry and compact dimensions. Increasingly nowadays, they also want a bit of style. Kia Venga certainly has the first three qualities. However, the fourth isn’t an instant win. It’s a car whose appeal grows on you.

Overall it has plenty of weapons to fight its corner in its market segment. In this 2 trim level buyers get electric mirrors, air-con, alloy wheels and MP3 connectivity. Other enticements include Venga’s five-star EuroNCAP rating and seven-year warranty, plus a boot space easily expandable to 570 litres thanks a foldaway deck and rear seats which slide forward when passenger legroom isn’t the priority.

The 89bhp petrol engine takes a little stirring, but is fine for this suburban runabout and is reasonably frugal. And with Venga being just over four metres from nose to tail, parking is no great concern.