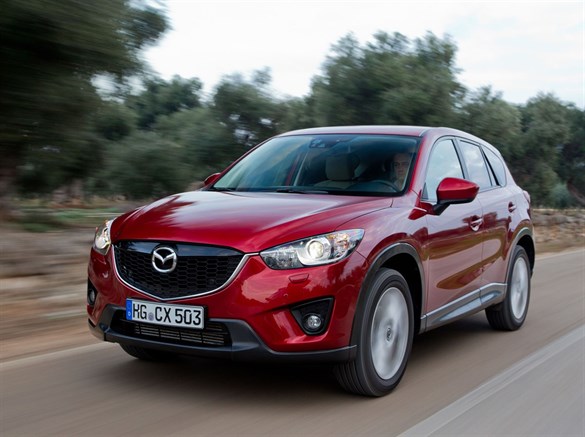 The CX-5 has had some time to bed in with the AM team now and has become the go-to car for motorway cruising.

The 2.2-litre Skyactiv-D engine is smooth and quiet on long journeys with a full load of passengers and luggage.

The CX-5 is composed on the road and fuel economy is starting to creep up past 41.2mpg, but it’s still quite a way off the official 54.4mpg figure.

One niggle noted is the prompt to update the satellite navigation maps which are apparently 10 months out of date.

This prompt has been blinking up after just two months of ownership, which could annoy customers that have bought new.

However, Mazda is including a sat nav upgrade for free at the moment so potentially that goodwill might help with customers that have to come in for an update.

Styling is still divisive with one friend calling it a “beast” which I thought was good, but he meant ugly. AM’s Skoda Yeti is a rival to the CX-5 and I’d say the Japanese model wins that battle.

Another called the styling strong, but not in a particularly attractive way, citing the Kia Sportage and Ford Kuga as examples that get it right.

But opinion on styling is totally subjective and it doesn’t appear to be turning customers off in their droves.

In fact, the CX-5 has helped Mazda with a turnaround in registrations which were up by 16.32% in July, but the brand is still down 11.42% year-to-date.

The CX-5 will be leading the charge for dealers as its thirstier sibling, the CX-7 has been dropped from the range and a Mazda6 Skyactiv won’t arrive until next year.

Mazda is hanging its future success on Skyactiv and customers trading down from a 199g/km CO2 CX-7 will save £335 in road tax as the CX-5 is in band E, which is £115 in the first year.

Customers also get a five star Euro NCAP safety rating too with top marks in all four categories.

The CX-5 is the third model to earn five stars, including the Mazda3 and Mazda6 since the introduction of its new rating system in 2009.

The lane keeping safety software is switched off by default, but it’s been thoroughly tested on the A14 with a simulated rumble strip noise blaring out on the relevant side of the car.