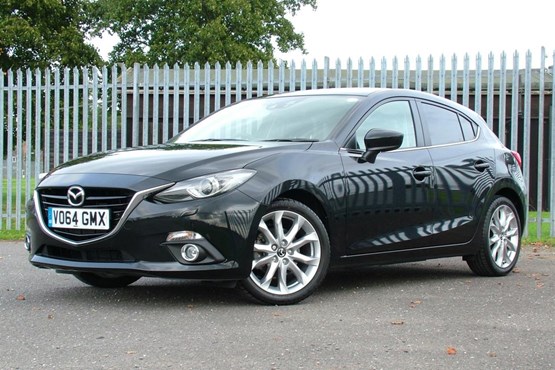 The Mazda3 has been with AM for about two months and I am still surprised at the level of space inside.

Being AM’s newbie, I’ve still not found anywhere to live in Peterborough, so I have been putting the ‘3’ through its paces by moving in. I’ve not been sleeping in it, I’ve just been travelling a lot and using its impressive space to store my belongings.

The boot space is 364 litres, rising to 1,263 litres with seats folded flat, all in a fully manageable hatchback package. In terms of practicality, it even features keyless entry.

Although on paper, this is Mazda’s third generation of its ‘3’ model, it could be argued that its ‘second generation’ was

basically a heavy face-lift based on the previous Ford platform. This is the next generation of Mazda3 with its all-new Skyactiv platform and good looks, so how did it fare?

In short, this is a great model – one Mazda dealers should be proud of.

However, if a customer is looking to confidently overtake a middle-lane-hog, perhaps the higher-powered 162bhp Skyactiv-G petrol, would be a better option.

Prospective buyers cannot expect the 118bhp Mazda3 to blow them away, but any who have already test-driven a rival Focus or Golf may be expecting a little more from the Mazda’s 2.0-litre engine.

This model reaches its 210Nm peak torque at 4,000rpm, so the naturally aspirated engine needs to be worked hard, unlike sprightlier turbocharged competition such as the Golf 120bhp 1.4TSI and the Focus 118bhp 1.0-litre Ecoboost Focus, which pull hard from 1,800rpm.

The Mazda 3’s fuel efficiency is impressive and true to its word with a claimed 55.1mpg (even returning a shade more in normal driving conditions). It’s just a shame it lacks the grunt required to match that exterior presence.

The level of style and specification was a pleasant surprise inside, with a fully integrated display system with satnav, but where is the DAB? All that tech and no DAB? This wonderful motorway plodder with impressive mpg unfortunately lacks road-trip 101 – Absolute 80s and 90s radio stations.

For low-mileage drivers, we’d recommend the 2.0-litre petrol engine. The 118bhp version gets from 0-62mph in 8.9 seconds, while the more powerful 163bhp engine does it in 8.2 seconds. If you want to save money and aren’t bothered about performance, the 1.5-litre petrol is the cheapest model to buy. It gets from 0-62mph in 10.8 seconds, but can feel underpowered at motorway speeds.

What’s nice about the Mazda3 is that it does things differently from the norm, with its big yet efficient engines and an obvious tilt towards enjoyable driving. This has its price in comfort, and the poor view out of the back can be a nuisance, but the 3 is nevertheless an alternative which is well worth a look.