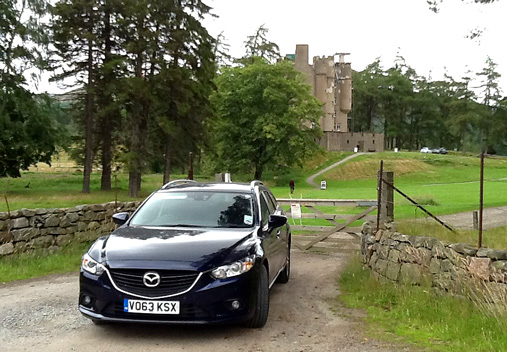 A road trip to visit a couple of dealers in the Scottish Highlands has proved a perfect opportunity to stretch the legs of our Mazda6 Tourer. In the space of four days, the car covered almost 1,200 miles, from AM’s offices in Cambridgeshire up to Inverness and then across the Cairngorms National Park en route to Aberdeen before returning to base.

It proved an apt marathon journey for this car, now nearing the end of its 12-month test period, because in Scotland the Mazda6 is a strong performer. In the first six months of 2014, 918 were registered in Scotland, of which 249 were Tourer variants. Those figures are almost triple that of the first half of 2013.

Mazda has 17 dealerships in Scotland, including the Shetlands. These are mostly with AM100 partners, such as Arnold Clark Automobiles, Lookers, Vertu Motors, Eastern Western Motor Group, Phoenix and Macrae & Dick, but smaller businesses also have representation, such as Border Cars, SDM and Struans.

Like most cars in the D-segment, the Mazda6 Tourer is heavily focused on company car users and the road trip demonstrated its strengths  as a relaxed motorway cruiser, but also highlighted its relative nimbleness on the twisting mountain roads between Inverness and Braemar. The car really felt well poised and steered tightly while its gutsy 2.2-litre Skyactiv turbodiesel engine made light work of the inclines, albeit a little noisily.

The next task facing our Mazda6 Tourer will be an annual service. The run to the Highlands has meant its current mileage is rapidly nearing the 12,500 mile service interval, so a call to our local Mazda dealership, Donalds, is on the cards for early September. The same dealership has serviced our previous Mazdas with no complaints and our expectations are high this time around.

It will be the second time Donalds Motor Group gets its hands on the car this summer, however. A colleague’s parking argument with a post put a dent in the nearside rear wheel arch, but the group’s Sycamore Accident Repair Centre restored it to perfection within three days. It even maintained the brand experience by loaning us a Mazda2 courtesy car during the repair.