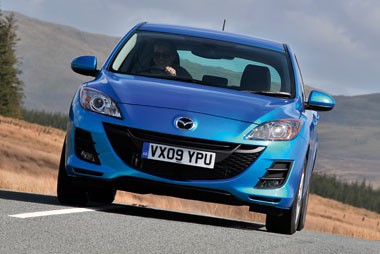 Having the Mazda3 parked on my driveway over the past couple of weeks has made me the envy of my cul-de-sac.

For while my neighbours have been forced to resort to some fairly vigorous scraping to clear their windscreens in the recent cold spell, or even resorted to gingerly pouring hot water on to de-ice their screens, I’ve been able to take a far simpler route thanks to the Mazda’s heated front windscreen.

My pre-commute routine has become very easy – clear the side windows, get into the car, turn on the heated front (and back) screen, watch my neighbours cast jealous glances my way, and feel smug for the short while it takes for the ice to disappear.

It’s simple, quick, clean and a real selling point, particularly at this time of year – and something which very few of its hatchback rivals can offer.
I’ve spoken to other drivers who have had cars with heated windscreens fitted, and we all agree that once you’ve enjoyed the benefits, you’re unlikely to switch to a car without one.

It just takes so much of hassle out of winter driving.

However, despite the emphasis I’ve placed on the windscreen, the Mazda is definitely not a one-trick pony.

Its overall package has continued to impress, with the powerful 2.2-litre diesel engine proving to be another highlight. Providing 148bhp, it offers plenty of flexibility and performance, with smooth power delivery throughout its rev range.

It has CO2 emissions of 144g/km and official combined fuel economy of 52.3mpg. Although I haven’t quite managed to reach that, a recent tank of fuel saw an average of 49.3mpg.

Grumbles about the Mazda3 are few and far between, but one irritant, however, has been the beep which greets most button presses in the cabin – at it’s most annoying when you adjust the radio’s volume.
Fortunately this can be switched off after negotiating a maze of menus on the on-board computer, which has left me to enjoy the benefits of the windscreen in blissful silence.

What Car?
A fresh and funky approach in an otherwise conservative market. The 3 backs up its snazzy looks with a sporty drive, so long as you avoid the 1.6 petrol engine. It’s great value and should prove reliable, too.

Carsuk.net
It’s stylish, well-built, economical and fun to drive. It’s well equipped and offers a creditable alternative to a Focus or Golf. We’d go as far as to say that the Mazda3 is as good as anything in its class.