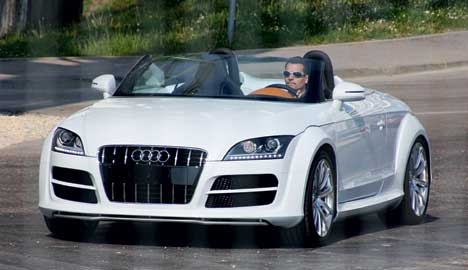 Remember the Smart Crossblade? Now Audi looks as if it’s about to follow suit, with a sun-loving speedster version of its TT sports car.

Our car paparazzi caught this prototype with a chopped-down windscreen on test in southern Germany and we hear it’s bound for low-volume production.

Sadly, you’ll be unable to buy it in Dorking or Dundee – the speedster is pitched squarely at Dubai and the Middle East with between 50 and 100 models planned. Hardly surprising, as the car won’t have a roof of any sort.

The speedster is closely based on the Audi TT Clubsport Quattro concept car shown last May.

It’s based on the conventional roadster, but with only a stubby blade of glass to provide occupants with a little protection from slipstream and kamikaze flies.

Bernd Rosenbichler, marketing director of Audi Middle East, told us: ‘We have been asked by Audi AG if we could imagine bringing this car here, and we are planning on making the worldwide premiere of this car here and then launching it just for this region.’

Exact mechanical details for the speedster remain sketchy, but the concept version had a high-output 300bhp version of the TT’s regular 2.0-litre sending drive to all four wheels.

What: An even sportier TT with a chopped-down windscreen
When: Expect to see the production version within 12 months
Why: Export only – to sweltering Middle East markets, not Europe