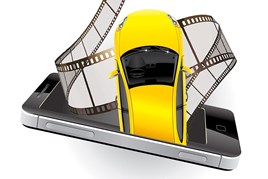 Today’s digitally savvy customer expects to become clued-up about the specific car they want online, and increasingly, they’re finding videos a useful tool in their decision-making.

A driving force in the sector is Wokingham-based CitNow, which has a presence in 42 countries, and expects to create about 10 million videos in the year ahead.

Chief executive Alistair Horsburgh said about 65% of the UK’s franchised dealers currently use its products for sales or after-sales uses, including 91 members of the AM100. Some 31 manufacturers also work with CitNow, of which 14 use its products as a white label service.

Horsburgh said CitNow’s digital tools can enhance almost every aspect of a dealership’s operations. “The clever, and the most entrepreneurial, sales people are personalising videos, and sending them to customers showing them (for example) how they could have the 2017 version of their current car, for around the same price as they’re paying now.”

He said it’s about developing an ‘emotional engagement’ with potential customers. It’s a new area of focus for CitNow, after video vehicle health checks have become widespread.

“I think this is giving the technicians back their voice,” said Horsburgh. “If you go back 20 years, customers stopped interacting with their garage’s workshop for health and safety reasons, and ‘contact’ became via report cards and a dealership’s front-of-house staff.

“The videos can be viewed, and work can be approved online, at a time convenient to customers. Dealers using the app have seen typical invoice levels rise between 20% and 30%.”

“The latest solutions are so interactive that you can put in details about things such as price offers or warranties” Rachel Price, AutosOnShow

Cardiff-based AutosOnShow came from a background in video streaming and software development to become an automotive industry specialist.

“When we started in 2010, our first solution was based on a turntable, and many dealers weren’t convinced, but now they’re really getting into video as it looks so slick and it’s easy to do,” said marketing director Rachel Price.

“Automotive is still far behind other industries in terms of adopting digital technology, but I think we’re now at a real tipping point. Not just the dealers, but the auction houses and the OEMs (original equipment manufacturers) are realising the bottom-line advantages. The challenge isn’t just about clever technology though. You have to tailor the solutions to fit into a dealership’s everyday processes, and understand that most people using them won’t be very technically-minded.”

Feedback from customers led to the focus being placed on image quality and the development of an Auto Image app to ensure anyone can get great results. Dealership staff follow a template and the images are uploaded to their site immediately. That development helped Volvo secure a rollout across its retail network.

“Since then, we’ve focused heavily on creating app-based solutions which give the OEMs and the large dealership groups the quality and consistency so vital to them,” added Price.

“I see the next trend as regionalisation. The latest solutions are so interactive that you can put in details about things such as price offers or warranties. Analytics is an issue we are discussing more and more. The top dealers really crave data because they want to know more about customers and the marketplace.”

Martin Peters, sales director at Autoclenz Group, is certainly a believer in the merit of video, although he concedes that many dealers have been slow to adopt the concept.

of 350+ dealers have adopted video processes

“Some groups really do get it. We’ve just started work with a new client, who has 18 dealerships, and they love the idea of using an iPad app to go round each vehicle, then wait just 60 seconds for the images to upload via Wi-Fi,” he said.

“I think images should be an integral element of the valeting process. Some might take four photos, some will take a lot more. I’d say the average is nine. Consistency is absolutely critical, and there may be issues about image capture, but I can’t see the argument for not taking images at that time.

“I understand that some dealers still prefer the old-school approach, of booking a photographer to come in and take lots of still shots on a particular day, but to me, that is slower and less efficient than video.”

Peters also believes dealers yet to adopt the new approach are missing out on sales to customers based outside their region.

“Almost all of us look to the internet when we’re thinking of buying something, and whether you’re selling a new or used vehicle, the reality is that most buyers do their research online and are at the final stage when they reach a dealership.

“If you go online, see the vehicle you desire, and it’s showcased in a very professional way in a video, where you can zoom in, check out the interior, see if the ‘leather’ really is leather and check the colours, then you’re a long way towards a purchase.”

The case for dealer video seems difficult to argue against, even in an industry which has long been slow to embrace technological change, but only some 10% of the 350+ dealers Peters works with have adopted the process.

“I am surprised it’s not being really driven by more manufacturers,” he admits. “Some are very keen, Hyundai, for example, but many aren’t yet fully convinced. However, I think as dealers hear on the grapevine that it’s delivering results for their peers, they’ll change their minds.

“Everything we do is about making life easier for our dealers, and, as the message about video spreads, I would expect our 10% figure to have increased to between 30% and 35% a year from now.”

“Intuitively, because we are in a digital era, dealer video feels like the right thing to do. Empirically though, we still need to see data which validates that approach” Paul Humphreys, Manheim Retail Services

“A well thought-out and delivered digital strategy can be extremely effective, if the visuals are good quality, and you’ve got the correct SEO (search engine optimisation) to drive consumers to your site, but digital can’t be the only thing you do,” he said.

“From a dealership perspective, a bad video is worse than no video at all. The latest video solutions make it quite easy for dealers to do things themselves, and we produce very natural backgrounds which can be placed automatically in position.

“However, we are still asked to do a lot of professional photography by the dealerships, and many feel happier getting the size of the images and all the content just right, before they go online.

“It’s true that some manufacturers are still rather more engaged than others with regard to their digital strategies, but equally, it’s sometimes down to relative resources. We also have no evidence that cars with videos sell better than those with high-quality images.

“Intuitively, because we are in a digital era, dealer video feels like the right thing to do. Empirically though, we still need to see data which validates that approach.”

In early August, Manheim gave a soft launch to a new tool developed by one of its sister companies based in the United States — SnapLot.

“It’s an intuitive out-of-the-box solution, including a mobile device for taking images, which makes it very easy for dealers to take high-quality pictures. These will be of a consistent standard and can be uploaded to a dealer’s stock management system,” said Humphreys.

“It takes only 15 minutes to capture images for each vehicle, and it’s been very well received. It runs on smartphones, and provides all the guidance anyone needs to take quality images.

”In the year ahead, I’d still expect dealers to be using a range of solutions to promote their vehicles visually. I also think we’ll see higher levels of integration between different dealerships in the same group, and I believe we’ll also see the big dealerships getting smarter about how they use SEO.”