Competition is the mother of invention in online classifieds 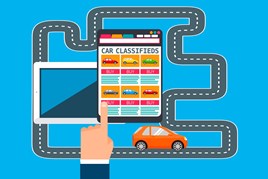 Competition in the online automotive advertising market has never been more intense, which is spurring on the leading players to become increasingly innovative and creative, leading to the rapid development of new ways of harnessing digital technology to attract both consumers and dealers.

“It’s just such an exciting time to be in the industry,” said Sharon Randall, Auto Trader’s UK sales director.

Over the past 12 months, Auto Trader has seen its retailer numbers grow by about 2.5% and it now works with 80% of the franchised dealer market. It believes a number of initiatives and product launches have underpinned this growth.

These include a new partnership with Trusted Dealers, an education programme of masterclasses, films and webinars that will reach out to 4,000 retailers this year, and the roll-out of its i-Control system, used by more than 1,100 dealers (including major names such as Lookers) to track daily market movements. According to Auto Trader, dealers using i-Control achieved a stock turn average of 29 days in July, compared with a market average of 52 days.

“We have also been investing heavily in our customer-facing people,” said Randall.

“One of the key changes we have made in the past two years is creating a dedicated team of highly specialised account directors, who are working predominantly across the AM100. We are in the process of appointing a franchise brand director, whose responsibility will be to help us understand the latest trends, not just here in the UK, but in other countries, and communicate these to our dealers.”

“Consumers are so much more knowledgeable and are turning up knowing what they want” Sharon Randall, UK sales director Auto Trader

Two trends retailers already need to comprehend, according to Randall, are that consumers spend an average of 14 hours online looking for the right vehicle, and six out of 10 customers arrive on the forecourt without making any prior contact with the dealer.

“Consumers are so much more knowledgeable and are turning up knowing what they want,” said Randall.

“As well as things like stock and pricing, we spend a lot of time advising retailers on how consumers are behaving, to help them convert every single person that comes through the door.”

It is five months since RAC Cars moved from a paid online advertising model to its new free-to-advertise strategy.

“During that time, we have seen the number of cars listed on the site increase dramatically, from 130,000 to 232,000, with further strong stock growth due before the end of this year,” said Hannah Darby, RAC’s head of marketing.

It has sought to differentiate itself from the established players in the sector through products such as RAC Car Passport data check, which it claims is the UK’s most comprehensive, and RAC Vehicle Inspections.

“We have developed RAC Cars into a credible alternative,” said Darby.

“We are receiving strong feedback from the dealers themselves, and the new advertisers that have joined RAC Cars since the relaunch have been a mixture of all kinds of dealers, ranging from top 10 franchised groups to small independents.

“Our key aspiration remains to challenge the traditional market leaders in the sector and we believe that, based on results so far, this is very much possible – while our pipeline indicates that we will see further, substantial growth on the platform over the rest of this year.”

Motors.co.uk, meanwhile, has made no secret of the fact that its media spend is running at £10 million a year, thanks to the backing of its parent company, Cox Automotive. It has advertised on television every month since January 2014, with over a thousand ‘spots’ in the past year alone. TV is one of the three pillars of its growth strategy, the other two being partnerships and products.

In the past 18 months, the business has launched its Night Owl out-of-hours service, which it said has doubled leads generated for dealers, the What’s Mine Worth tool, which  provides trade-in valuations for consumers, and it was first to market in late July with its monthly payment search function.

“There is an appetite in the marketplace for something new, something different, and being seen as an innovator helps us acquire new dealers” Mark Hammond, sales director, Motors.co.uk

“We are constantly investing to grow our audience and drive enquiries to our dealers,” said Motors.co.uk sales director Mark Hammond.

“There is an appetite out there in the marketplace for something new, something different, and being seen as an innovator helps us acquire new dealers.

“In terms of the franchised market, 73% of the AM100 dealers currently advertise on Motors.co.uk. However, it’s the independent market where the really significant growth is coming from.”

In 2013, when the AA joined forces with Vcars to sell cars online, it declared it was going to “clean up car buying”. A year later, it was named as the UK’s most trusted brand in an independent survey. “The AA brand is unique and being associated with a trusted brand is important,” said Paul Yates, operations director of AA Cars.

“Dealers know their stock will be on a reputable site where there are other quality cars. Some of our competitors play games around stock, which we try to avoid. We don’t advertise cars that are sold, for example, and you don’t often see a car for less than £2,000. We are trying to deliver as much confidence as we can into the used car market.”

In its latest quarterly update, AA Cars reported that traffic was up 50% year-on-year, car views were up 60% and enquiries up 20%. Its customer base is growing – 2,500 dealers in total, split about 60% independent and 40% franchised. In the latter segment, it has been working closely with, among others, Mercedes-Benz Retail and recently reacquired Ford Retail.

In the months ahead, AA Cars plans to engage more with AA members and make greater use of video, but, like its rivals, is wary of giving too much away. “We are going to be making a number of big changes to enhance our overall proposition over the coming year,” said Yates.