Is the car price haggle dead? 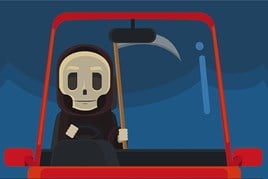 It may come as a surprise to salespeople who have spent years honing their haggling skills, but most customers would rather just hand over whatever it says on the windscreen.

Auto Trader’s Market Report last year found 56% of consumers who had bought a new or used car had paid the asking price.

Karolina Edwards-Smajda, Auto Trader retailer and consumer products director, said: “If a customer trusts the price, they’re also less likely to haggle or get a deal. I’m sure there is still a segment of buyers that do like to haggle and get a deal, but the majority don’t.”

Dermot Kelleher, director of marketing and business intelligence at Motors.co.uk, said his company’s research showed only 25% of customers like to haggle.

He said: “For the remaining 75%, clearly ‘no hassle, no haggle’ is appealing on the proviso that their research indicates the car is priced fairly.”

Interestingly, 81% said an advance part-exchange offer was more likely to encourage them to visit a dealership.

Some dealers, such as Volkswagen and Škoda group Citygate, aim to avoid negotiations by pricing fairly and transparently.

Jonathan Smith, managing director, said: “We try to adopt a no-haggle policy on the basis that we constantly monitor to ensure we are competitive.

“Typically, customers are uncomfortable negotiating and, as long as they are getting a fair price, are happy.”

Prior to opening its stores at Bluewater and Westfield Stratford shopping centres, Rockar conducted research that found the only car buyers happy to haggle were men aged 45-65.

Simon Dixon, managing director, said: “The overwhelming response we received was the greatest dislike of the process of buying a car was having to negotiate and not knowing whether you’ve been given the best price. Providing all the information switches the balance of power from the dealer to the customer.

“People want to go away and consider it before making their decision without feeling pressured – 60% of our customers will transact online even if they have visited the store.”

James Tew, chief executive of online finance tools provider iVendi, is not so quick to bury the haggle.

“It’s in a consumer’s DNA to get a perceived ‘deal’. I call it the ‘Dominos Pizza effect’ – the gamification of hunting a discount code so as not to pay full price.

“We have those consumers who hate haggling and those who see negotiating as all part of buying a car, but there are an awful lot of people in the middle. Some people are negotiating multi-million pound deals every day, so they are not going to be fazed by a car salesman.

“The price of a car impacts the search, so cars have to be priced fairly, which means the dealer is more likely to hold out on the price and that has helped to reduce the amount of haggling, but everyone gets the same and that’s the issue.”

Paul Gordon, managing director of Autotorq, believes a vehicle transaction should be on a par with other goods such as a new kitchen and even a television, where the price is the price.

He said: “Despite the impressive car showrooms and the brand identity of the franchise, people still expect to haggle even though, increasingly, people don’t want to.”

However, he believes the shifting of much of the sales journey online, with the visit to the dealership the final step in the process, is changing that.

“People don’t want to haggle, they want a simple, transparent process as that’s what it’s like when we buy other things. I think we will see more innovation in the marketplace which will move away from a haggle-based sales proposition.”

Manufacturers have responded to customers’ dislike of haggling, such as Citroën with its ‘fair pricing’ strategy, and are looking into online selling, putting customers in control in an omni-channel approach.

BMW introduced its Genius programme, designed to remove the ‘hard sell’ and provide product knowledge, to ensure customers select the most appropriate vehicle, in 2012. In 2015, it launched BMW Retail Online.

Both initiatives have seen the  negotiation process evolve rather than disappear, although Paul Kester, part of BMW’s modern retailing team and project manager of the online concept, also highlighted the predominance of PCP, which has reduced haggling among consumers.

He said: “The key advantage of online tools is to serve customers with purchase convenience and put them in control. BMW Retail Online enables price flexibility – it is not a fixed price channel. Customers and retailers can meet the same price online as they can face to face. We simply provide a choice for customers, as some may find it more comfortable to negotiate from behind a screen.

“The online sales platform still allows the customer to deal with a ‘real person’, be it through live chat or another means, and this extends to a discussion about the final purchase price.”

In September, Lance Bradley, the managing director of Mitsubishi Motors in the UK, told AM that he believes the way customers now choose their cars may finally lead to one of the most awkward points in the car-buying process being jettisoned.

“A car purchase should be fantastic, not just all right, but brilliant and really enjoyable. But in a lot of cases it’s not – the customer knows the dealer is better at haggling than they are because the customer does it once every three years and the dealer does it every day.

“If there were a way of getting away from that, it would be a good thing.”

How PCPs put an end to bargaining on price

He said: “It has been evolving since the onset of PCP (Personal Contract Purchase) and taken off since the product started selling in large volumes. Haggling has always been about the price of the car, but when you think about 90% of new cars are sold by PCP, it becomes more about the finance and the monthly payment.

“The PCP will often include the price of the service plan and new cars today are much more highly specced so the opportunity to negotiate for accessories is also reduced. The days when you asked the salesperson to throw in the car mats are coming to an end. The haggle or the negotiation has effectively been taken out of the process.”

Citygate’s Smith agreed: “A lot of customers do their research online and come in with a quote from a site like Carwow. Given that most new car customers buy on PCP, we can quickly overcome the price and discuss payments.”

Tew said iVendi’s research found more competitively priced cars are typically transacted at the advertised price or even higher, as the dealer upsells products such as GAP and paint protection, while vehicles priced a little higher are more likely to be transacted at a lower price.

“I think we will get to the point where one deal might be offered online, but the individual deal is restructured and accessed via a secure area, so we will start to see deals negotiated in a slightly different way. The deal could go up or down, dependent on whether customers add products like GAP or service plans,” said Tew.