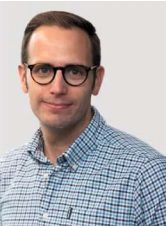 Seven months before car retailers were being urged to nurture their online leads during COVID-19 coronavirus lockdown heycar launched in the UK with the aim of bringing a fresh approach to used car marketing.

Between then and now its efforts to drive growth with a strong marketing voice and lengthy free trials aimed at forging strong relationships with car retailers have delivered consistant travel in the right direction.

Chief executive Mat Moakes spoke to AM's Tom Sharpe ahead of the health crisis that stalled the UK's automotive sector.

Heycar only launched in the UK in August last year but, already, it feels like a familiar name. Can you remind us how the business was formed?

Heycar was founded in Germany through some of the innovation that Volkswagen Financial Services were creating in 2015 to try to determine what a next-generation of automotive sector businesses might look like. Heycar quickly emerged as one of the project’s big successes and was a huge hit in Germany. Daimler wanted to have a greater input in used cars and seized the opportunity to buy into the business later on. Our platform aims to be very clean and transparent and to make it easy for car buyers to find what they are looking for. We have a really simple car finance calculator and a simple system based around monthly price, things that people tell us they want to see.

How does heycar differentiate itself from the other online classified advertising platforms?

What we stand for is quality leads. Those leads come with exposure. Auto Trader has market dominance, yes, but we are actively reaching out to customers. If you are on a railway station or travelling on a bus right now you’re likely to spot a billboard promoting heycar. We went live on TV and out of home on Boxing Day. What we have seen from Cazoo is a platform that is the norm in North America, but has been a long time coming here. We have a different proposition which offers a choice of high-quality stock from established dealers. We’re also a very consumer-focused proposition and, through our relationship with various manufacturers, we have access to different types of stock.

In February, you bought the consumer car-buying advice website Honest John. To what extent was that designed to offer further exposure for heycar?

We launched heycar to drive greater trust and transparency. That’s exactly what Honest John has been doing for the past two decades. The acquisition of the site will allow us to achieve that mission faster, by bolstering heycar’s growth and industry presence. We’re always on the lookout for opportunities to grow and to enhance the experience for car buyers and drive commercial benefit for our dealers, captive and manufacturer partners, where company values align. The independence and strong reputation of HonestJohn.co.uk has been earned through the years and brings great value. We will maintain this independence through the formation of a clear editorial code between the two brands, continuing the impartial tone HonestJohn.co.uk’s millions of website visitors and tens of thousands of newsletter subscribers expect. Users of the Honest John forum will not notice any difference.

Are there features that are not yet part of the heycar offering that you would like to be able to deliver?

We are working with dealers right now to see how we can facilitate that direct online click-to-buy service and bring some of those selling points being offered by Cazoo to market with them. Transparency around finance offers is becoming ever more important and I think that, just as people can go to buy a house with a pre-approved mortgage, pre-approved finance facilitated through our site could ultimately make life a lot easier for dealers. Ultimately, we want to add value for our dealer colleagues and the consumer. Dealers are already delivering the cars bought on heycar direct to customers. Today that number was 49 cars.

How much stock is now featured on the heycar platform?

Today we have 154,000 vehicles listed on our website. It was about 100,000 when we launched (in August, 2019) and that stock will grow. We now have 3,000 dealers represented on the site and that has grown from around 2,500 when we launched. The pricing model for retailers is quite simple. You can list as many cars as you want on the site and pay when there is a customer that is genuinely interested in a vehicle. We’re well over 25,000 to 30,000 leads driven to dealers since August, now. We have trebled the scale of the business over the past three months and that has been through marketing spend and partnerships.

How effectively has the business been able to gain traction in the sector, in terms of building key relationships, since the business was launched?

We’ve obviously had the support of Volkswagen and Daimler and, from the dealers’ side, retail groups including Evans Halshaw and Jardine have been on board since day one and have really helped us to develop our UK proposition. Coming from outside the industry I see that, while there are a large number of dealerships and dealer groups, they all have their own characteristics. With the bigger groups we may have been able to make contact through VW or Daimler, but we also have a commercial team actively engaging with businesses and helping them improve sales by looking at their lead management systems and the success of their local campaigns. Dealers are rooting for heycar to work. People are actively willing us on to make an impact.