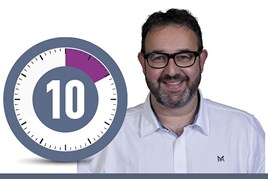 Where does the UK sit in terms of scale for CDK?

The UK is our second biggest market outside of North America, behind China, which is one of our biggest areas of opportunity given it is by far the world’s largest car market with something like 27 million annual new car sales.

The UK is the fifth largest car market, so from CDK’s standpoint the UK punches above its weight. It’s an important market for us.

What do you see, in your global perspective, that UK dealers need to be aware of?

That whole global view and reach is useful, because one of the things we’re trying to do is to become ‘One CDK’.

That’s about how we leverage our global scale more effectively. We’ve 550 R&D people, that’s coders and developers, in the UK; globally we have more than 2,000. So if we can start to leverage that scale we’ve an advantage, as there aren’t many organisations which have that many R&D people developing software and products.

So dealers will get what they want faster?

Historically the industry has wanted answers now rather than when systems providers can get around to it. We’ve probably not been as fast as people wanted, and there are a number of reasons for that, predominantly internally-focused.

This comes back to that One CDK mindset. The reason why it has historically taken such a long time to develop things is that we tended to have a silo approach with R&D, product and individual market. So if you wanted to do something specific for the UK it was difficult.

Now we’re using an agile development methodology, and we’re leveraging our scale. Before if you wanted a product for the Spanish market it was developed in Spain or in the UK using that fixed resource.

Now we know we have more than 2,000 developers, and we can, for example, create one sprint in the UK, three sprints in India, and one sprint in Spain, with all of those sprint teams working independently, yet together, to complete their own portion of the development.

You can potentially have things done in a much shorter period. And we’re looking at how we build things that are reusable, developing functionality for a particular market, but which might be usable in other markets.

Will that have any impact on specific demands from the UK?

There are some differences.

For example, US cars are largely sold from stock, but the underlying processes are the same – you need to interact with your manufacturer so you need interfaces within the database management system (DMS).

So we can leverage global scale to do those things more effectively and efficiently for the UK automotive industry, and then we know there are areas in which the US is more advanced, so we can bring over some of the thinking and processes. Marketing is probably a good example – US dealers tend to be better at marketing, but they’re much more readily driving enquiries into their dealerships.

Another thing some other markets perhaps do better is to turn used cars more quickly.

Here, with a client who has ordered a new vehicle and is waiting for it to arrive, not many dealers try to market or pre-sell the part-exchange car before it comes in. They’ll know the exact age of it, they’ll know its approximate mileage, they’ll know all the details of the vehicle because they probably sold it originally so the information is in the DMS.

They’ve appraised it as part of the sales process so, potentially, they may have some images of it.

Therefore, if one of the things dealers can do to improve profitability is improve stock turn, then an element in doing that might be advertising the used car at day minus 15 rather than at day plus 15.

If you want to turn that into profit quickly, the best way is to start advertising it. At any one time you’ll have fleet cars, courtesy cars, PCP cars all coming back, and there is a logic in using some systems thinking to speed that up and make you more efficient in turning stock faster.

What changes are ahead in the short term for CDK and dealers?

There are three things: systems, people and process. I can build you a brilliant IT system, but if you don’t have the right people or the appropriate process within the dealership it will only be so good. That whole piece about sales people needing to be personable is still relevant. Systems can only take you so far, at least in the offline environment.

One of the big areas we see is the seamless flow of online to offline. Omnichannel retailing becomes more important, and it’s about how people do that more efficiently and effectively. We term it a frictionless sales process. The customer should find it fairly frictionless, going in store should be just another part of the purchase journey.

You potentially need different people – some who are more customer-focused. You need process, because there’s no point training all the sales people to do exactly what they’ve always done because that won’t work for all your customers. And you need the appropriate systems to cope with that.

It’s about workflows. We’re going to de-content the monolithic DMS, to enable us to make it market-focused and flexible.

As we move forward, it’s about creating that much more open platform.

It has historically been a criticism of major DMS providers that they want to keep everything for themselves and aren’t keen to integrate with other systems, hasn’t it?

Yes. That’s very much where we’re moving – from a monolithic software provider to enabling workflows. We’ll develop a different approach and a blend of strategic initiatives, and in the end, that takes us to a whole end-to-end platform that enables automotive commerce.

Even today the DMS is a platform rather than a software application, but increasingly tomorrow it needs to be a platform. With Autoline Drive now we can give a set of APIs which a dealer’s website provider can use to enable seamless booking of a service into their workshop loading application in their DMS.

That’s a good example of a workflow – we don’t provide your website. We don’t define how you choose to use that as an app or whatever, but we make it easier for the dealer to know who the customer is, what car it is, what parts and hours it needs, what slots are free in the workshop, so it enables a seamless workflow.

How quickly will we see the benefits of this new strategy?

Reasonably quickly. Having talked about APIs, in Denmark we’ve developed a Smartpay application which lets people pay by mobile phone.

In Italy we have a new analytics tool. In the UK we’ve much deeper integration with CitNow in our VHC product. So we’ve already started on the journey. The much deeper level is something that will come clear in the medium term.

Much of it is about us being market, rather than product, led.

How do you get that market insight?

We have focus groups, forums, and user groups, some on a franchise basis, or the major groups feed back to their account manager, and we’re very engaged with the OEMs so we understand what’s driving them forward.

All of these things are about how we act and react differently, and how we do things in a way that solves issues our customers have.

The industry often sees the people aspect as a challenge, and seeks to minimise the risk of that human interaction. Do you see more dealer processes being automated in the future?

There are absolutely some areas where you provide a better customer experience and generate efficiencies by systemising things.

And there are others that probably don’t because people want one-to-one interaction.

Sales administration, for example, has a whole degree of inefficiency which doesn’t need to be there, and we can start to automate that out.

And in service reception, there’s a line of customers all waiting to drop their keys off, and chances are they’ve already been through all the checks either on the phone or online when booking, so why must they queue?

Telematics will let the dealer know they’ve arrived, if there’s any fault codes, and all that will help to provide a better experience. In China, we have systems linked to automatic number plate recognition, which tell the arriving driver to leave their car in a particular bay and head to another bay for their courtesy car.

The reason you want to do this as a dealer is it potentially lets you reduce your overheads in terms of people, lets you provide a memorable consumer experience, and lets you build in customer loyalty.

Most popular articles in Supplier Interviews