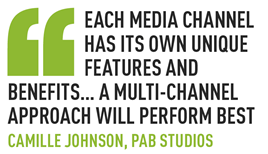 As manufacturers push ahead with plans to transform their online offering to facilitate new car sales, retailers seem to have identified the value of their own window on the web.

A dealer website emerged as the clear favourite in terms of both effectiveness and return on investment (ROI) when AM posed a series of questions to determine which channels best serve our readers’ marketing needs.

Among our survey respondents, 88% listed a website among their marketing methods, unsurprising at a time when it might be assumed that a car sales operation without one would struggle to survive.

Of those, 95% described it as “somewhat or very effective”, the same percentage reporting that they found the medium offered “good or very good return on investment”.

One marketing manager at an AM100 retail group clearly realised the need for a high-quality website, stating that the business needed to update its website, but conceding  that improvements were part of a “very long-term plan”. She added that the business was “still spending too much on print and post with a poor ROI”.

Our poll raised clear questions of the relationship between the most popular marketing channels and their ROI.

Facebook ranked second in popularity, with 83% of dealers availing of its ability to reach specific audience demographics, ahead of online classifieds (63%).

However, the positions were reversed when it came to effectiveness and ROI. Ratings of “somewhat or very effective” and “good or very good ROI” were agreed by 74% each for Facebook versus 85.7% and 78.6% for online classifieds.

Twitter, now central to many dealers’ social media relationship-building and reputation management, is clearly not performing well as a marketing tool for them.

Used by 50% of respondents – the same as pay per click – just 25% of users deemed Twitter effective while just a third (33.3%) said it offered a good ROI.

The local press’ issues as an effective marketing tool for car retailers seem to be centred on value for money.

Of the 54% that still use local press, 50% scored it highly for effectiveness, but only 8.3% found it good value.

Camille Johnson, director at Wakefield-based marketing agency PAB Studios, said in her survey comments that “each media channel has its own unique features and benefits”, depending on the product or service being promoted.

She said: “A multi-channel approach that leverages the unique benefits of paper with the convenience and accessibility of digital will perform best.”