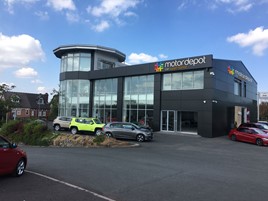 Motordepot is preparing to complete a programme of growth which will have doubled the the size of its UK network in just 12 months with the opening of a new car supermarket in Stoke.

The new site is the fifth new site to be acquired by the group within the past 12 months and will take its total network to ten sites by the autumn.

Last month the used car retailer based in Hessle, near Hull, announced that it will follow-up June’s opening of its eighth retail site in Barnsley with an announcement that it planned to open a further South Yorkshire location in Sheffield later this year.

A three-acre site, located on Handsworth Road, Sheffield, has been acquired and follows successful openings in Worksop, Newcastle and Barnsley.

The team will also have access to over 3,000 cars in group stock.

Steve Butterley, Motordepot’s managing director, said “We are all really excited to be bringing our business model to Stoke-on-Trent, it will complement our existing site in Birmingham and strengthen our presence in the wider Midlands area.

“We recognise how important our people are in securing the success of our business and we are delighted to have retained the existing team as a whole.”

In order to accelerate further expansion, Motordepot recently opened a four-acre vehicle preparation centre in Goole, East Yorkshire, with the creation of up to 100 new jobs.