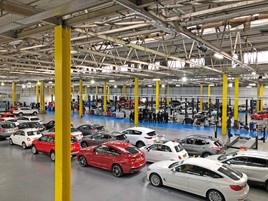 Big Motoring World has opened a new £14m vehicle preparation centre in Peterborough as part of a bid to drive further growth following the sale of 22,000 used cars in 2018.

The 170,000sq-ft is equipped with what has been described by the ID50 car supermarket operator as “a full production line” featuring more than 70 ramps for maintenance work and pre-delivery inspections to be carried out, along with 15 MOT bays.

The ID50’s fifth-placed independent car retail operation by turnover – with revenues of £174.6m in 2018 – claims to have created 300 new jobs with the development of the facility on Morley Way, Peterborough, just a few weeks after the purchase of the site was officially completed.

Bob Ruprah, operations director at Big Motoring World, said: “I’m delighted to have been involved in the creation of our national preparation centre.

“We received the keys to the building on June 1 and got the site operational exactly two months later – it was a phenomenal team effort.

“Everyone in Peterborough has given us the warmest of welcomes and the staff we have recruited are of the highest calibre with exactly the skill sets we need.”

Big Motoring World was founded on the driveway of its chief executive, Peter Waddell, 30 years ago.

The car supermarket group typically has around 3,500 high-quality vehicles in stock and sold 22,000 cars during 2018.

It said in a statement that the new preparation centre in Peterborough will ensure the ongoing high quality of the cars it supplies to customers and provide “a springboard for future growth”.

Waddell said: “I’m proud of the whole team and Bob in particular who has played a key role.

“This is an exceptional facility of which any dealer group would be proud and shows that even after 30 years in business, we never stand still. We have even more exciting plans for the future – watch this space.”

In May last year Big Motoring World expanded with the opening of what remains its latest used car supermarket opening, with the development of a 2,000-car, 20-acre site at Bluebell Hill near Chatham in Kent. 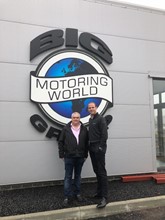