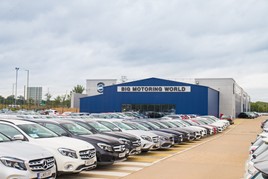 The Big Motoring World used car supermarket business has reported that it managed to overcome the challenges of COVID-19 to increase its used car sales volumes in 2020.

The Canterbury-based independent car retail business, which is also behind the Carzam online retail operation which begun operating late last year, built on a record 2019 by selling more than 22,000 cars last year – up on the 20,404 sold in 2019.

Chief executive, Peter Waddell, said: “In Q2 we were the first out there, operating click and collect, but in the face of limited customer interaction, it hampered sales and opportunities to sell value added products.

“Despite this we recorded an excellent result for the year and I am so grateful for the support of my colleagues and all of our employees, and to those business partners who found ways to help us through a very challenging times.”

Big Motoring World opened its smart new 900-car site at Enfield during 2020 and that helped the group increase sales, according to Waddell.

“The new 900-car site at Enfield which opened at the start of the year has matured rapidly to deliver well above expectations,” he said.

“The Peterborough preparation centre which opened in mid-2019 has scaled up quickly to service the requirements of Big Motoring World too.”

Waddell added: “When we are beyond the Covid-19 restrictions, and the vaccine is rolled out, I am very optimistic about the prospects for bumper trading.

“This business is capable of delivering closer to 30,000 units and £20m EBITDA, and we’re ready to make that a reality.”

Earlier this week Carzam reported on its successes in its first six weeks of operation.

The online rival to the likes of cazoo and cinch recorded 1,000 sales in the period and claims to be on course to sell 20,000 cars in its first year.