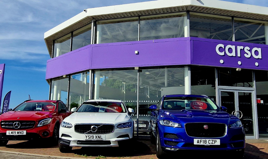 A trio of directors who previously helped drive Imperial Cars to rapid growth have expanded  their Carsa used car dealer group with the opening of a new showroom in Bradford.

Carsa, a used car retailer launched in 2020, now has showrooms in Southampton, Mountsorrel and Bradford and describes 2022 as being “a big year” as it gears up for the launch of new sites in areas including Birmingham, London and Wales.

Carsa’s rapid growth, through occupying former franchised car dealerships, is reminiscent of the significant expansion of Imperial Cars, which became one of the UK's top 10 largest independent used car dealers prior to its acquisition by online car retailer Cazoo.

Speaking to the Telegraph and Argus newspaper in Bradford about Carsa’s latest site opening, Beatie said: “This opening is another exciting step in our ambitious growth plans.

"Everyone in the Carsa team is really looking forward to delivering for new customers, not only Bradford but in surrounding areas like Halifax and Morley.

“As a company, we have a very clear motivation, which is to provide a choice of incredible cars, price monitored to ensure we always offer a fair deal in a totally hassle-free, low-stress environment.”

Carsa provides a click and collect service from all its car dealerships as well as offering the option of home delivery to its customers.

The business has also recently acquired a huge collection and preparation centre in Eastleigh.

The T&A reported that Carsa was already on target to be moving over 1,200 vehicles through the centre to their showrooms.

Imperial Car Supermarkets was established in 2006 and eventually grew to operate 18 dealerships with total revenues of £200 million prior to its 2020 acquisition by Cazoo, including a 10.8-acre Bristol facility.

In 2019, after winning the AM Award for Best Used Car Dealer (independent) that year, Imperial's then operations director Neil Smith and managing director Mike Bell told a dealer profile interview for AM they were aiming to have 20 locations operational by the end of that year.

At that interview Bell, the majority shareholder, said he was not building the group with the aim to sell up.

After a short period at Cazoo post-acquisition, Smith now runs his own consultancy, Motorvait, for motor retail businesses. He is not a shareholder or director of Carsa.