Infiniti will expand its UK model range with its first luxury hybrid this spring with its new M35h. 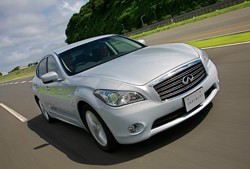 The model will compete head on with Lexus’ hybrid saloon range, as well as executive class German rivals.

The new model is capable of cruising on full electric power at speeds of up to 50mph. The car runs silently at slow speeds when powered by the electric motor, so the M35h is fitted with Infiniti’s approaching vehicle sound for pedestrians (VSP) system which emits a sound that varies in pitch and volume at speeds up to 20mph.

Prices for the Infiniti M35h, which will be offered in either GT or GT Premium trims, are due to be announced before the Geneva Motor Show at the start of March.