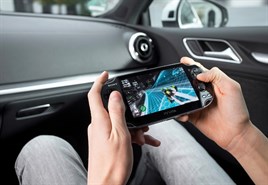 Renault is working with Orange to develop high speed 4G internet connectivity in its future models.

Under the partnership, Orange (now operating as EE in the UK following a merger with T Mobile) has rolled out 4G in advance at Renault’s research and testing facilities.

The aim is to enable both partners’ teams to test in real-life situations the uses enabled by very-high-speed mobile technology, ranging from virtual office and cloud gaming to video conferencing.

An initial test is underway on a version of the Renault Zoe electric vehicle which will be presented at Le Web’13 conference in Paris this week.

Rémi Bastien, Renault head of engineering innovation, said: “This partnership is an example of an effective working relationship between two very different worlds.

“We were able to benefit ahead of time from a high-speed network and from Orange’s expertise, with an opportunity to take advantage of the network for our prototype of the connected vehicle of the future.”

Audi launched 4G connectivity on its A3 range of models (pictured) in the UK in November. It will be rolling the technology out across more models next year.

4G/LTE ( Long Term Evolution) enables the transfer of large amounts of data, such as music and films in HD quality, via the internet. The LTE standard is also expected to provide a strong boost to the use of media stored on a server on the internet (data in the cloud).

In the Audi S3 Sportback, 4G/LTE technology will accelerate the delivery of many of the services of Audi connect to the driver – from navigation with Google Earth and Google Street View to Audi music stream web radio and online traffic information. The latest incarnation of Audi connect in A3 and S3 models also offers social media access, a fuel station locator which incorporates distance and pricing information, and a local parking availability and pricing function.