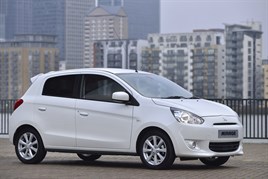 Mitsubishi is to build on the workshop retention gains achieved under its service pPlan for new cars with a similar package for used vehicles.

Speaking at the launch of the B-segment Mirage, managing director Lance Bradley said: “Franchised workshops were typically retaining 80% of customers for the first year service, 70% for the second and 45% for the third.

“Since the introduction of the Mitsubishi Service Plan five years ago, these percentages have gone up to a corresponding 95%, 93% and 88%.”

Bradley said the gains had also been helped by a value service package for vehicles over three years old that also included the option of ‘matching quality’ non-OE replacement parts, writes Chris Phillips.

“As with many other brands, research shows that customers would like to use franchised dealers for service and maintenance, but are put off by price, compared with the independents.

“Our Value Service offering is based on customers reasoning that as the car gets older, they perhaps don’t want all the normal servicing – pollen filter changes, for instance – but still want the fundamentals like an oil change.

“Similarly, they’re more likely to use one of our dealers if, instead of a quote for £500 for a new OE exhaust, they are offered a ‘value’part replacement at £200.” This option, introduced last year, now covers 50 lines for all Mitsubishi vehicles.

As a further aid to price competitiveness, dealers were expected to offer a discounted labour rate, with Bradley reasoning: “Though there is less margin, it’s better to have a smaller percentage of something that was not there before.”

Bradley said further details of the used car service plan would be announced closer to the launch date, scheduled for mid-April.