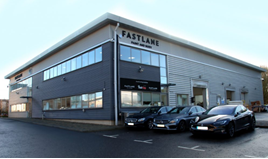 The company already has an agreement in place with MBRG to handle all of the company’s approved paint and body related work across its dealerships around Greater London. Fastlane also works with Lookers, Sytner and Tesla.

The acquisition at Brentford includes the transfer of 55 employees and Alex Andrea, Fastlane’s group managing director, said the agreed plan for the acquisition will include a relocation away from Brentford next year.

Perry Robb, consultant at Fastlane, told AM: “Mercedes-Benz UK were impressed with how Fastlane does business and when Daimler AG in Germany decided it wanted to sell the retail group’s bodyshop site at Brentford, it approached us as a potential buyer.

“Fastlane has built up a reputation for being a business that is turned to when a problem job comes in. It has also built up expertise as a plug-in vehicle repair specialist after heavily investing in this area.

“This was of particular interest to Mercedes-Benz who are moving in that direction with future product.”

Robb said work is still being done on the deal to relocate to the Heathrow area, but once an agreement is signed, work will start quickly and the move will be completed by the end of Q1 next year.

Crash repair market to reduce by 17% by 2030 due to advanced driver systems, says ICDP

Crash repair market to reduce by 17% by 2030 due to advanced driver systems, says ICDP