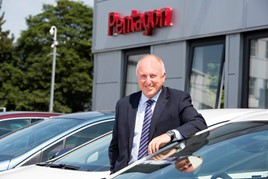 Pentagon Motor Group has announced its intention to acquire three Ford dealerships from TrustFord – in Warrington, St Helens and Runcorn.

The sites, which were previously branded as Polar Ford, before being moved in to the Ford owned TrustFord retail group will be rebranded as Pentagon Ford and operated by the Derbyshire-based group which currently operates 38 franchise outlets from 23 sites across the East Midlands, North West, South Yorkshire and Lincolnshire.

Pentagon Motor Group, managing director, David Lewis, said: “We are very pleased to be adding Ford to the Pentagon group and working together with TrustFord this promises to be a smooth transition.

“We are keen to ensure that all current staff on the three sites transfer happily to Pentagon Ford and we will do all that we can to ensure this is the case. For customers it will be business as usual.”

However, the group’s parent company, Motus Holdings (UK), already has Ford Transit Centres at Grimsby and Halesowen as part of its Imperial Commercials Division.

The formal completion of the acquisition of the three new Ford franchises is expected to take place on December 31.

TrustFord chairman and chief executive, Stuart Foulds, said: “As part of our ongoing review of our property portfolio we are in negotiation with the Pentagon Motor Group to sell them our Warrington, St Helens and Runcorn dealerships.

“All colleagues located in these businesses have been informed and will be transferring over to Pentagon so customers can continue to experience the same high levels of service for all their vehicle sales and servicing needs.’’

Rob Truscott, CEO of Motus in the UK, said: “As a Group, we are committed to growth. Not growth at any cost, but where we see a real opportunity at sensible investment levels, and the acquisition of these three important Ford sites delivers on this for us.”

The vehicle division of Imperial Holdings SA acquired the Derbyshire-based group for a sum reported to be R493-million (£28.5m).

At its annual conference, held in Daventry last month, TrustFord's leadership team outlined many of the group's plans for the year ahead.

TrustFord is preparing to expand into Scotland as it takes a central role in Ford of Britain’s new Parts Plus wholesale parts network.

Foulds described the new wholesale parts proposition as a “huge opportunity” for the group, which will also be expanding the Ford brand’s QuickLane fast fit brand and developing mobile servicing across parts of the UK in a bid to boost the service offered to its own fleet customers.

Expanding on Foulds’ outline of the PartsPlus plan, PartsPlus operations director, Richard Allott, revealed that – while negotiations were still ongoing with the proposed operators of the 70+ Ford PartsPlus territories across the UK – TrustFord is expected to be in-line to run 19, with each business fully operational by the end of H1 2019.

TrustFord is also planning to participate in the UK-wide introduction of Ford’s QuickLane all brands fast fit network already firmly established in the US and will roll out mobile servicing across some areas of the UK in order to meet the needs of its own fleet customers.