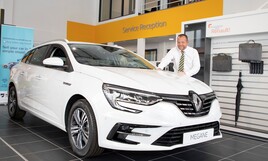 Vertu’s new business is the seventh Renault dealership in the group.

“The team is looking forward to welcoming new and existing Renault Dacia customers to the new site where they can be assured of a warm welcome and the very best cars, deals and customer service.”

In Vertu’s year-end statement, published back in May, Forrester reported that the group will continue to drive a “big brand” profile after adding 30 car retail outlets in 15 months.

And, after upgrading its pre-tax profit forecast for 2021 to £28m to £30m – thanks largely to the ‘exceptional used car market’ – the business reasserted that it was “very well placed to capitalise on the changes and opportunities in the UK motor retail sector”.

It has also added Citroen into its Macclesfield Ford dealership and Kia into its existing Volkswagen showroom in Nottingham as part of a multi-franchising drive and completed the £1.5m development of a new Macklin Motors Motornation used car and van showroom in Lookers’ former Glasgow Volkswagen Van Centre.

Earlier this week AM revealed images and video from a trailer for the new series showing the disguise donned by the high-profile industry figure in order to move freely among unsuspecting Bristol Street Motors staff.