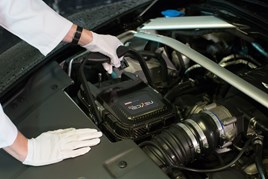 Oil supplier Castrol has developed a new oil change product containing a unit with new oil and filter that it says will cut the time of an oil change to 90 seconds.

Castrol says the Nexcel speeds up oil changes and creates less waste and mess. Oil cells are collected after use, avoiding wastage of used oil. This oil can then be re-refined back into high quality lubricants.

A spokesman for Castrol said: "The aim is to ensure that Nexcel costs the consumer no more than a standard oil change today.

"We aim to ensure Nexcel compares favourably to the cost of oil, filter and labour in a conventional oil change. It’ll be five to 10 years before Nexcel is on mainstream road cars & exact costs aren’t known that far into the future."

Engine designs must be adapted to use the Nexcel system. Castrol is expecting manufacturers to to launch with Nexcel compatability in the next give years.

Paul Waterman, Castrol chief executive, said: “We believe this is the biggest leap forward in oil change technology in the history of the combustion engine.

"Castrol’s engineers are leaders in their field and have come up with a really innovative piece of technology. It’s the result of almost three years’ work but as soon as people see the benefits in emissions and servicing as well as the substantial environmental benefits, they will ask why it hasn’t been done before.”

Castrol says the Nexcel system has been tested on a range of engines from small city cars to high-powered racing engines in extreme of conditions.