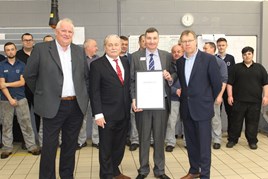 The dealership was the first to take on the VPS programme as Volvo Car UK looked to set new standards for its dealerships nationwide by piloting new initiatives with selected dealers, back in 2013.

VPS sees teams of Personal Service Technicians working on cars as groups rather than individually in order to save time in order to create reduce waiting times and offer greater convenience for customers.

PSTs become a single point of contact for the customer in an effort to build stronger relationships and trust.

Paul Trainor, Mill Sunderland’s service manager, saw his team undergo an audit at the hands of two representatives from Volvo’s head office in Gothenburg before the dealership was awarded its VPS status.

He said: “The team at Sunderland have been following the PST programme for three years now as part of VPS and have completely changed the way they work, for the better.

“The team are now mostly self-managed, looking after their own diaries and customers, from in-house training.

“We also held workshops out of hours and on Saturdays to make sure we were all up to speed. The team varies a lot in age, we have some aged 22 and others over 50 – everyone has taken to the PST programme incredibly well and we can’t imagine going back to our old ways now.”