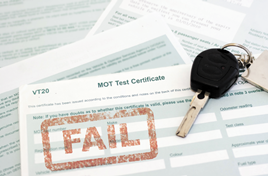 A fear of MOT failures under strict new rules from the Vehicle and Operator Services Agency (VOSA) may deliver more motorists into franchised dealers’ workshops. Under the new legislation, introduced on May 20, vehicle faults categorised as ‘dangerous’ in a new three-tier test will make it illegal for a motorist to drive away in their vehicle – even if it has time to run on its existing MOT certificate.

Any motorist found to have left a test centre in their vehicle following identification of 'major' or dangerous' faults could face a £2,500 fine and six penalty points on their driving licence.

Among the faults that trigger an instant fail are a faulty or missing diesel particulate filter and the installation of high-discharge headlight bulbs.

The threat of such severe penalties may lead to more motorists taking advantage of vehicle health checks (VHC) from franchised dealers, to keep close tabs on their vehicle’s health and legality.

Martin Riddell, account director at Coachworks Consulting, said: “Dealers should have already started to communicate with their customers to make them aware of the changes and why they are better qualified than anyone else to

undertake the work and make any subsequent repairs on vehicles with ‘dangerous’ or ‘major’ fails under the new system.”

He said: “We carry out a visual inspection of every vehicle that comes in for an MOT and our technicians are manufacturer-trained to spot anything that might be wearing or not quite right.

“Should a customer want any remedial work carried out, they know that we can bring it right up to standard with manufacturer-approved parts, something that could hold even greater value under the new rules.

“Treated right, the MOT is a very good retention tool and it’s certainly something that more franchised retailers should be working hard to promote.”

The MOT as retention tool

The scores are reversed on value for money, however, with 42% of respondents considering independents as “good value for money” compared with just 23% for franchised dealers. VHCs may offer an advantage in foreseeing issues that could lead to an MOT fail, reassuring the customer that they will not be left without transport, but retention will rely on good value, too.

Riddell warned there is another potential barrier to the VHC and maintenance upsell, designed to ensure that the opportunity presented by MOTs is not abused.

Riddell said: “MOTs cost £54.85, so dealers need to treat the charge as a subsidised labour rate, which can often generate additional work, through faults and advisories, sold at the full retail rate.”

However, he added: “Dealers have to be very careful that they don’t use them as overt upselling opportunities.

“The Department for Transport does not allow dealers to conduct vehicle health checks during an MOT test because it should not be used as a selling tool. Those caught doing so can be penalised with points added to their MOT licence.

“However, VHCs can be conducted before or after an MOT test. If dealers adhere to this, then they have a valuable opportunity to sell red and amber work. Dealers do have a duty of care to customers to perform VHCs on all cars on their ramps, but we advise them to adhere by the rules.”

Among the changes to the MOT testing, a number of other changes are being introduced, including:

Riddell said the new, more onerous test regime may affect the financial viability of MOTs for some franchised dealers, leading to greater outsourcing of the service to specialist providers.

He said: “What we don’t know is how long the new test will take, because there are more checks involved, and how this will impact workshop time.

“However, dealers are incredibly adaptable and will take any increases on the chin because they know how important it is to retain those customers rather than lose them to independents and the fast-fit centres.

“That’s where added-value items such as a free car wash and VHC can make all the difference.”

Nathan Tomlinson, the dealer principal at Devonshire Motors, which won the 2018 AM Award for  Best Aftersales Performance, said recent growth in the UK’s car parc has left many franchised dealers’ aftersales facilities short of space, leading them to question the value of MOTs.

He said: “Space is limited, and many sites can only make room for one or two MOT lanes. Those lanes have to be financially viable.

“Per MOT lane, eight to 10 MOTs each day are typically possible, but even with a full-price MOT, the MOT facility does not compare well to a service ramp’s return, where the same space (or less) could be utilised instead.”

Tomlinson said the requirement for customer retention means the MOT facility will always have a very important place, regardless of financial return, but added: “Where space is limited, care has to be taken to get the balance right.”