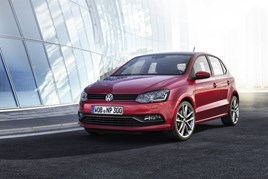 Volkswagen’s Polo emerged as the cheapest hatchback to maintain when WhoCanFixMyCar analysed more than 300,000 data points to discover the facts behind cost-effective car ownership.

The aftersales provider aggregator website analysed more than 300,000 data points to reveal which hatchback cars cost the most to maintain across three best-selling brands – Volkswagen, Vauxhall and Ford – and found that the Polo undercut its bigger-selling rivals.

WhoCanFixMyCar found that when looking at the most common repair jobs, the Volkswagen Polo had the lowest average repair cost of £214.05. The Ford Fiesta is the second cheapest at £230.07, followed by the Vauxhall Corsa at £238.21.

Conversely, the Volkswagen Golf was not only considerably more expensive to maintain than the Volkswagen Polo, with repairs costing 21% more on average, but also outstripped the outlay commanded by the Ford and Vauxhall.

Focus and Astra models were shown to have a much smaller cost gap between models, the Vauxhall Astra is just 8% more expensive than the Corsa, and the Focus is just 1% more costly to repair on average than the Fiesta.

Alistair Preston, co-founder of WhoCanFixMyCar.com, said: “We decided to compare the best-selling hatchbacks because often drivers struggle to decide which model to purchase. The cost of maintenance is increasingly becoming a larger factor in the purchasing decision, so we believe it’s useful to know which of the UK’s popular hatchbacks are the most expensive to maintain.

“Although it’s pretty tight between the brands in terms of average maintenance cost, there are some big differences when you look a little closer. The difference between the Golf and Polo is vast, something to consider if you can’t choose between the two models.”

He added: “Vauxhall come out expensive on some of the larger repair jobs too, so depending how old the vehicle is that you are purchasing you could get some unexpected repair bills.”

WhoCanFixMyCar found that Volkswagen models were more expensive than their rivals on average for routine maintenance such as car batteries, brake pad replacements and servicing.

The Golf in particular is also pricey for some non-routine repairs such as exhaust repairs and cambelt changes.

When WhoCanFixMyCar.com analysed the percentage of jobs posted by service type, it discovered that 13% of Volkswagen Golf jobs were for a cambelt change, which is more than double the average across all other vehicles, and is 5% higher than the Ford Focus and 6% higher than the Vauxhall Astra.

The average age of a VW vehicle for a cambelt change on the site is 5 years, whereas it is 10 years for a Vauxhall and Ford. 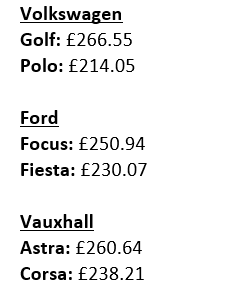