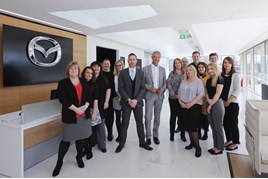 Mazda UK has celebrated the “superb results” achieved by its in-house customer call centre during its first year of operation.

Mazda brought its customer car lines in-house on April 1st last year and has reported that, in the period since the switch from an outsourced provider, it has handled an average of 10,000 customer contacts each month and seen first time call resolution rise from 35% to 68%.

Praising the results of the Customer Relations Centre, which is housed within Mazda’s UK headquarters in Kent and staffed by a 20-strong team, Andrew Beale, Mazda UK customer service operations manager, said: “Everyone involved knew it would be a huge task but I’m proud to say that one year in we’ve seen superb results.

“Under the previous outsourced structure the average amount of calls resolved first-time was 35%, now that has almost doubled to 68%, while we now open emails within a day on average rather than four days with the old set up.

“On top of that, the volume of ongoing cases has fallen from an average of 156 to 101, plus arguably most impressive of all, the typical duration of a customer case has tumbled from 35 to just three days.”

Overall Mazda UK’s CRC centre enjoys around 10,000 points of contact a month, which can take the form of phone calls, emails or correspondence on social media.

Around 5,000 of those are phone calls and around half are from Mazda owners with the majority of the remainder being Mazda dealers making arrangements on a customer’s behalf.

Mazda said that its focus on the consumer is ongoing with the next step being a live web chat, which will be introduced before the end of the year.

By 2018 Mazda aims to be the third highest ranked non-premium car maker for customer satisfaction, with a vision of being world leading by 2021.

AM Awards 2017: Manufacturer of the year - Mazda

AM Awards 2017: Manufacturer of the year - Mazda