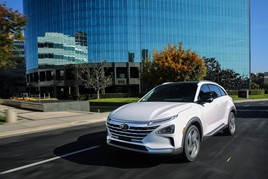 Hyundai has been warned to be mind its marketing since an advert for its NEXO fuel cell car claimed it "purifies the air as it goes".

The Advertising Standards Authority has banned Hyundai from making the statement "a car so beautifully clean, it purifies the air as it goes" which appeared on the Hyundai.co.uk website beside the Hyundai NEXO.

A complaint was made to the marketing watchdog in January.

Hyundai showed the ASA how NEXO's air supply system to its fuel cell filtered gases and 99.9% of very fine dust, which was retained by the car, and this meant purified air was expelled from the system.

But the ASA found that because NEXO did not filter and clean particulates from its own brakes and tyres, Hyundai's claim was misleading.

"We acknowledged that there were air filtration systems in place within the Hyundai NEXO, which would filter the air before it was used in its hydrogen fuel cell. However, we understood particulates from brake and type wear would still be released into the air and would not necessarily be removed by the car, unless they happened to pass through its air filtration system.

"We understood that particulates from brake and tyre wear were a significant source of air pollution from vehicle use. Because we considered the claim “A car so beautifully clean, it purifies the air as it goes”, as it was likely to be understood by consumers, had not been adequately substantiated, we concluded the ad was misleading."

The blow for Hyundai comes two months after the ASA upheld Vauxhall's claim of being a "British brand since 1903", despite the car brand being owned currently by the Dutch-domiciled Stellantis and prior to that by US-based General Motors.

After Vauxhall Motors issued a response to complaints stating that the Vauxhall brand was a UK-registered entity, which bult cars in Britain and sold Vauxhall-branded vehicles exclusively in Great Britain and Northern Ireland, the ASA rebuffed the claims.