Car dealers made average profit of £43,000 in June

For the first time in 2015 UK car dealers have achieved a year-on-year improvement in financial performance.

This produced a reversal of the recent decline in overall rolling 12 month profitability, which once more rose over £200,000 to £209,000, says data providers ASE.

The return on sales percentage remains under pressure given the increases in turnover, however the improvement in bottom line profit is good to see, said ASE chairman Mike Jones.

“The strong profitability in June was driven by the vehicle sales department and the recognition of quarter two registration bonuses.”

The high registration levels led to an increase of £15,000 in vehicle sales department gross profits, with only a £6,000 increase in expenses.

“One note of caution is that some brands have encouraged dealers to boost their results in June by recognising the first half of their annual bonuses in June rather than waiting until the year end as in prior years.”

The trend of new vehicles being registered to hit target and then remarketed as used vehicles continued in June.

“We saw a strong performance on new vehicle sales in the month, which are up 6% on June 2014.

Used vehicle retail sales rose 10% in June, with sales up for the first half of the year by 7% in total.

"The used car result shows the self-registered vehicles are being remarketed effectively, albeit we remain concerned over the level of nearly new stock still to be sold which is currently depressing the used car return on investment.” 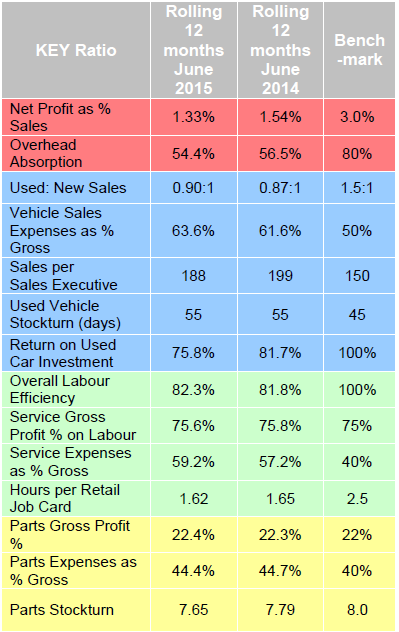