Dealers make a £16,000 average loss in August - pre-registrations on the increase

Franchised dealers made an average loss of £16,000 in August, typical of the month before the plate change in September.

“Ever since the plate change month moved to September, August has been a tough month for UK motor dealer profitability and 2015 continued this trend,” said Mike Jones, ASE chairman.

“The combination of the holiday season reducing working days with the impending arrival of the new registration plate results in August producing the largest single loss of any month.”

“With registration statistics up 9.6% in the month an increase in self registrations is evident during August.

“In absolute volume terms this represents a small number of vehicles.

“However, it does continue the trend we have seen throughout 2015.

“In the first 8 months of the year dealer new car sales are 2% down whereas registrations have increased by 6.7%.

“There is little evidence of these self-registrations providing unsustainable pressure on the used car market as yet with used car return on investment improving slightly during August and stockturn speeding up marginally.

“Used car gross margins rose in August to 11.6% and there was a small decline in the average stand in value.

“The September financial result is going to be pivotal to the overall position for the year, and early indications are that we could mirror June and produce a strong profit, outperforming 2014.

“Registration levels are considerably ahead of the prior year which will bring associated healthy bonuses.

“The challenge will be to maintain this throughout Q4 and finish with an average site profit of over £200,000 for the year.” 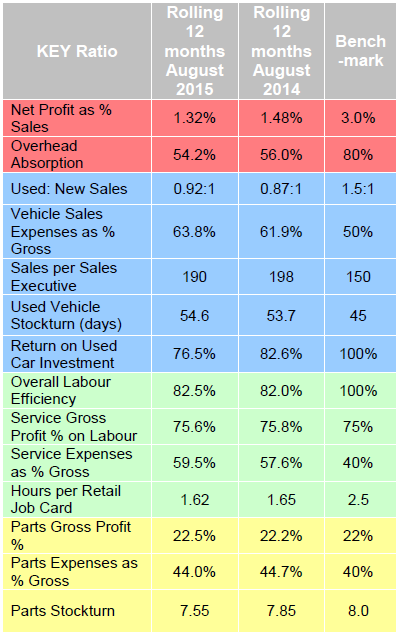