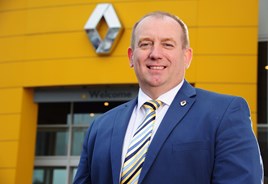 Renault Retail Group has appointed Barry Jones as managing director of its UK operations, replacing Richard Hemming who takes on a new role outside the group.

Following a period of time as regional director for the Renault Retail Group covering the North-West and the Midlands, Jones has been operations director across the UK for the last six months.

Jones will oversee all of the Renault Retail Group’s activities across its Renault, Dacia and Nissan sites in the UK.

Moving to the Renault Retail Group in 1999 as general sales manager at Renault Manchester, his new appointment will see him draw on his previous experiences as general manager overseeing the group’s Autoworld and Liverpool sites.

Renault Retail Group has 19 dealerships in the UK including 18 Renault sites, six Nissan and one used car supermarket.

Jones said: “Having worked for the Renault Retail Group since 1999, I am very proud to be appointed as managing director, especially during a time of great growth for our manufacturer partners.

“I’ve always been committed to achieving such a position within the group and I look forward to driving the company towards the next level of volume in line with Renault, Nissan and Dacia's aspirations.”